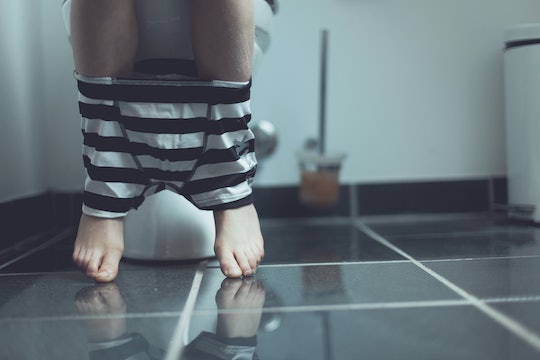 Ugh — It's Actually *Super* Easy For Your Kids To Get Pinworms

"Don't bite your nails, you'll get worms." This was something my MawMaw told me every day from age 3 to 33. She was absolutely convinced that my habit of biting on my nails would lead to a terrible pinworm infection that would "make you scratch your bottom like a politician in the hot seat after being caught in a lie." Did I mention my MawMaw was Southern through and through? But was she right? Is biting your nails how it happens? How do kids get pinworms and what can you do about it?

Pinworms are undoubtedly one of the grosser maladies of childhood — although adults can get them as well. No one wants to think of intestinal inchworms living inside of you or your children only to escape through your rectum via your feces and leave eggs around your anus. It's like some sort of dystopian horror show, only it's very, very real, even if it's not that dangerous, according to the Centers for Disease Control and Prevention (CDC). The Mayo Clinic reported that it's most often contracted by children coming in contact with the eggs and putting their unwashed hands in their mouth. The eggs are spread by children scratching their bare bottoms and getting eggs on their hands and then touching their friends, or their toys, or a surface.

That means that this whole time, my MawMaw was abso-freaking-lutely right. The random nail biting habit I have always had could lead to pinworms in my butt. I need to invest in some gloves, or perhaps that bitter apple spray used to deter dogs from chewing on the furniture. (Or just think "worms in your butt" every time I go to chew on a nail.) But is that the only way to get it? How do kids get pinworms if they don't bite their nails? Because while I've never met a kid who doesn't constantly have their hands in their mouths, I'm sure they exist.

Apparently, these eggs scatter really easily, noted The San Fransico Gate. So, bear with me through this disgusting scenario for a minute. Imagine you're sitting at lunch with your friends. Dude to the left has a raging case of pinworms and was just going to town on his butt on the way to the cafeteria. He now has eggs all over his nails. He opens his lunch box, grabs his napkin, and fluffs it out. Or, perhaps, he reaches over and hands your kid a fork. When he fluffs the napkin, the eggs scatter. When he grabs the fork, the eggs make their way to the tines. Or your kid just sits on a toilet seat covered in eggs. The possibilities are seemingly endless for this sh*t show. Just like with the stomach flu, it doesn't necessarily mean you're dirty — just unlucky.

One way it can't be passed is from your pet. According to the CDC, humans are the only carriers of E. vermicularis — or the human pinworm. The way it's diagnosed is harrowing. According to the Mayo Clinic, doctor will perform a "tape test," which is essentially sticking a piece of clear tape over your or your child's butthole and seeing if any eggs or worms attach. They'll look at it under a microscope, and evaluate. It's treated with either over-the-counter or prescription medicines after your doctor makes the official diagnosis.

To prevent the spread of infection, it's important to note that according to the CDC, these eggs can live a few weeks on surfaces, and they travel easily in the the wind. They suggest vacuuming every day, cleaning all surfaces with hot water, washing your laundry with hot water, and showering instead of bathing. They're specific that you should have your children shower alone and not share washcloths, and that you should clean your toilet every day. Encourage a lot of hand washing, and yes, you should listen to your MawMaw when she tells you that biting your nails could give you worms.