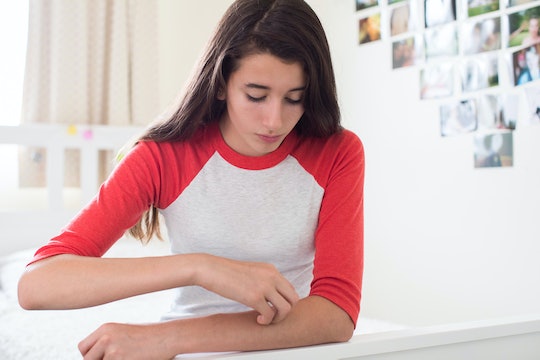 Ringworm Does Spread Pretty Easily (Ew), But There Are Precautions You Can Take

The name alone is probably enough to make your skin crawl: Ringworm is something no parent wants their kid to deal with. And though it's not actually a worm — it's a relatively harmless fungus — that doesn't make it any less stressful. So how do kids even get ringworm? Unfortunately, it's super common and can spread very quickly, no matter how much hand sanitizer you use.

Seattle Children's Hospital described ringworm as a contagious fungal infection of the skin. Kids Health noted that it's caused by a type of fungus that normally lives on our bodies, that starts to grow out of control. When your child has it, you'll see a round pink circle on their skin that looks scaly around the edges, but clear in the middle. It can itch a little bit, and it can slowly grow in size.

There are many different ways that ringworm can spread. The American Academy of Dermatology outlined causes like skin-to-skin contact with someone who has it, sharing things like towels or hairbrushes, or petting an animal with ringworm. Kids who play full contact sports like football or wrestling, and who use gym facilities that may not be frequently disinfected, can have a higher chance of getting the fungus. Depending on where it develops on the body, it's also known as athlete's foot or jock itch.

Ringworm is most common in kids 2 and older, but younger babies and adults can get it, too, according to Baby Center. If you're seeing just one patch of ringworm on your child, chances are you can treat it with an over-the-counter anti-fungal cream, according to Healthy Children. You should still run it by your pediatrician, but in many cases, ringworm is more of an annoyance than a danger.

If ringworm hits your child's scalp, however, the situation can be more serious. The Mayo Clinic noted that ringworm on the scalp can lead to scarring and hair loss if left untreated. In that case, you'll most likely need a medicated shampoo and oral medications to get rid of it. It may take quite some to clear up, though. Healthline noted that ringworm infections can last a month or more, and even worse, it can come back.

I've heard so many moms say they feel like utter failures when their kid comes down with ringworm (or equally icky yet also common ailments like lice), but honestly, it's just really easy to catch. Fortunately, there are lots of things you can do to prevent ringworm. The Centers for Disease Control and Prevention noted that your kids should always wash their hands after playing with pets. Let them know that they shouldn't share things like hair brushes or hats and never walk barefoot in a public locker room or shower. Frequently swapping out dirty sheets and towels for fresh ones will also help. If you think your pet might have ringworm and you don't want it to spread to your family, check in with your veterinarian for treatment.

And if ringworm does strike your house, don't panic — it's not quite as scary as the super gross name would imply.