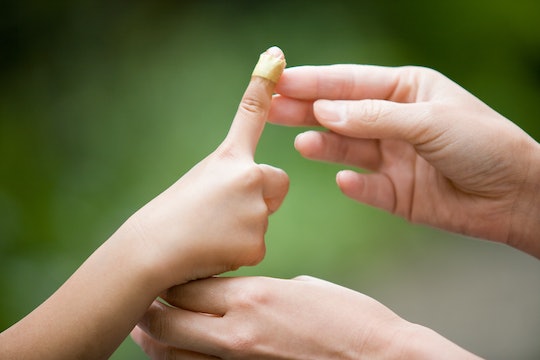 It's Easier For Kids To Get Warts Than You Probably Think

It's just an unfortunate fact of life as a parent: Kids are basically walking, talking, petri dishes. Covered in bacteria and viruses and contagions of every kind, you never know what those grimy little hands are going to bring into your home. Sure, there's the common cold (and some not so common ones), but what about all the fevers and rashes and lumps and bumps? What about... warts? It's true: Even if you generally associate warts with cartoon witches, kids are actually quite susceptible to the aggravating flittle bumps. So how do kids get warts, exactly?

First things first: As upsetting as it can be to spot a wart on your little one, you should know that she's far from alone. In fact, about 10 percent of kids will develop the pesky (but benign) growths at some point, according to Seattle Children's Hospital. Caused by several different human papilloma viruses, warts are round, raised little growths with a rough surface. They're skin-colored or pink, and most frequently show up on the hands (particularly the fingers). While nobody wants their kid to get warts, it's worth noting that they're not generally painful — unless they're plantar warts, which are on the sole of the foot. Sometimes warts on the fingers can be irritated during the writing process, too.

Unfortunately, many parents are misinformed about how warts are transmitted between kids (or grown-ups, or both). Over the years, you've probably heard and followed such age-old advice as "always wear flip-flops in a locker room shower" and "don't kiss any toads," but these measures are unlikely to keep your kid wart-free for good (even the flip-flops one).

A study conducted by researchers at Leiden University Medical Center in the Netherlands found that kids are more likely to contract a wart-causing virus at school or home than in a locker room or a swimming pool, as NPR reported. Approximately 1,000 children ages 4 to 12 took part in the study, which required the kids to report on the status of their warts over a period of 18 months, as well as whether or not they went swimming or barefoot in certain places.

"The kids happened to be really enthusiastic about it," lead researcher Dr. Sjoerd Bruggink told NPR.

The results of the study, which were published in the journal Pediatrics, showed that kids who got warts were more likely to have classmates with warts. Swimming, public showers and/or going shoeless didn't seem to increase any risks.

"If you think it through, it would be more logical to prevent them in families or school classes than in swimming pool areas," Bruggink said. "You would think of covering the wart, and thereby preventing the HPV virus to spread."

Indeed: There's no going back once those pesky little spots pop up, but you can at least prevent them from spreading to the rest of the family. Johns Hopkins Medicine offers the following tips: Don't let a child's wart touch other parts of his body or other people. Don't let your child share anything that touches his wart, such as towels or bedding, and make sure he wears socks or slippers around the house if he has warts on the bottom of his feet.

There are a number of treatments available for warts, from using topical medications to freezing them off to cutting them out. Your pediatrician will choose a method based on the type, size, and age of wart.

But with a little luck and a lot of prevention, hopefully you'll never have to try any of them.