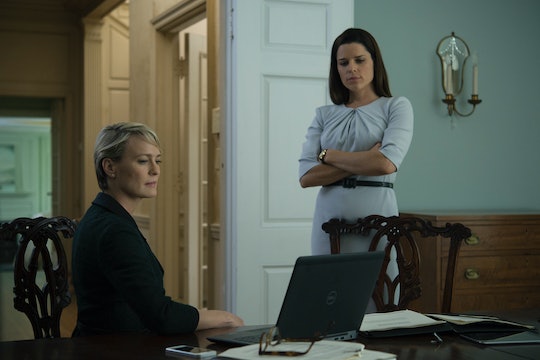 How Do Leann Harvey and Remy Danton Know Each Other on 'House of Cards'? There Are Many Motives Behind Their Meeting

In Washington D.C., and particularly in the fictional D.C. of House of Cards, it seems like everybody has history with everybody. House of Cards newcomer Leann Harvey, a powerful Texas democrat with consulting capabilities, and Remy Danton — a now-retired ex-lobbyist, ex-Press Secretary, and ex-Chief of Staff to Frank Underwood — are no exception. Leann starts off Season 4 in cahoots with Claire Underwood, as the First Lady is trying to recruit her to be the Chief of Staff for her upcoming congressional run and beyond, even though she seems to have a history with Frank's former right-hand man. So, how do Leann Harvey and Remy Danton know each other? (Spoilers for Season 4 of House of Cards.)

Remy, in the middle of a hook-up with his Season 2 love interest Jackie Sharp, reveals that he knows Leann from his days as a partner at the lobbying firm Glendon Hill. According to this pillow-talk session, the company couldn't afford Leann, although Jackie's comment about Leann turning him down teases something else.

Glendon Hill served as Remy's employer for the first two seasons of House of Cards, where he worked as a lobbyist on behalf of SanCorp, a natural gas company. SanCorp was a major donor to Frank Underwood's political campaigns, which is how Remy eventually ends up in Frank's pocket. We also know from the Season 4 premiere that Leann has been offered plenty of gigs in Washington, but has turned all of them down to remain in her high-profile position in Texas, potentially allowing these two to cross paths more than just the once.

After his encounter with Jackie, Remy meets up with Leann at a bar on the night of the State of the Union speech to see what he can get her to dish about Texas Congresswoman Doris Jones's plot to give the Sharp campaign $3 million. Being the powerhouse that she is, Leann expertly pins his motives right away. They both awkwardly reveal cards they didn't mean to play and Leann cuts the meeting short, suggesting a truce for the two to stay out of one another's business — considering Remy has technically "retired" and all. We'll see how long that lasts, right?

Poor Remy can't seem to control his feelings for Jackie, so he breaks it off with her — yet again — to avoid getting ensnared in another political dirt-finding mission. Not only does this get Remy out of the cross-fire that might be coming for Jackie, but it also opens Remy up for a potential relationship with Leann. Because there's no way their encounter at the bar was the final time these two will play together.