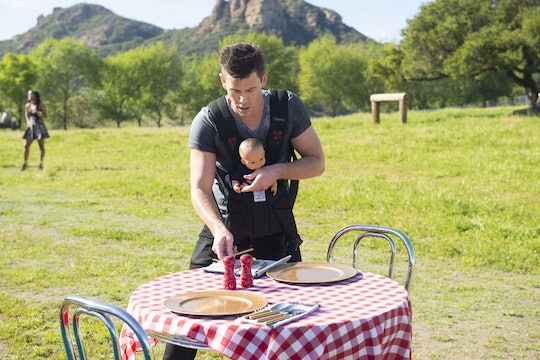 Lucas & Blake E. Have History Outside Of 'The Bachelorette'

An early rivalry is already forming on The Bachelorette between Lucas (better known as "The Whaboom Guy") and Blake E., the aspiring drummer who's apparently gotten a lot of positive feedback on his sex life. (Cool.) But their tension didn't originate in the house. We learned in Week 2 that the pair actually have history. So how do Lucas and Blake E. know each other on The Bachelorette? It turns out that neither of them are strangers to reality TV.

They were both on the first season of a show called Ex Isle, which aired in 2016 on WeTV. The show's premise involved five broken-up couples going to a remote island with a therapist and Carmen Electra (she hosted) to gain closure on their failed relationships. Midway through, 10 singles entered the picture to help those former couples ~move on~. (Cue drama, jealousy, etc.) Both Blake E. and Lucas were original cast members who came onto the show with their exes. Lucas' ex was a woman named Brittney who — shocker — ended up hitting it off with Blake. Blake did go to the trouble of disclosing his history with Lucas to Rachel, but he, uh, left out some details. At least, that's what it was edited to look like.

Blake told Rachel that he knows Lucas because his ex-girlfriend was Blake's roommate. But he didn't tell Rachel he and Lucas met on TV. That's a pretty charged rivalry to come into the house with, and it's definitely about more than just Blake's annoyance with Lucas' TV persona or the possibility that he's there for the wrong reasons. Britt did her part to disclose her side of the story on Twitter after the episode in question.

Of course, it's also possible (though I'm going to go ahead and say unlikely) that Blake did disclose everything to Rachel but producers edited it out to maintain a certain degree of the show's fantasy element, rather than letting us in on the secret that some contestants are just recycled reality show players. But this is the internet, where we can figure out everything about everyone, so neither Blake nor the producers' secrets are safe. Luckily for them both, a secret-girlfriend also showed up this week to set Rachel straight on DeMario, so it doesn't seem like Lucas and Blake's conflict will come to a head this week. If Bachelor Nation has it's way, though, we won't have to endure Lucas for much longer.

Correction: An earlier version of this story incorrectly stated that Britt and Blake had dated. Britt's tweets have been added for clarification.