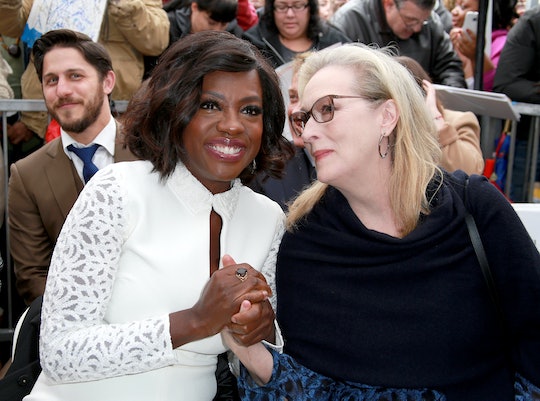 Every awards season, there are always those super incredible, amazingly touching award acceptance speeches that fans can't stop talking about. But at this year's Golden Globes, actor Viola Davis managed to steal the show with a beautiful introduction about actor Meryl Streep, who was the recipient of the Cecil B. DeMille Lifetime Achievement Award Sunday night. The pair apparently have a very close relationship, so how do Meryl Streep and Viola Davis know each other? Turns out, their work together on the 2008 film Doubt enabled them to become full-fledged besties.

The duo were each nominated for Academy Awards for that year: Streep for Best Actress and Davis for Best Supporting Actress — but neither went home with the Oscar. Then in 2012, Davis and Streep faced off against each other for the Best Actress Oscar: Davis for her role in The Help and Streep for her role as Margaret Thatcher in The Iron Lady. Ultimately, Streep beat Davis in an Oscars shocker — Davis was heavily favored to win, but with a friendship as close as theirs, the pair couldn't have been happier for each other.

On Friday, Streep had the honor of introducing Davis, who received the first star on the Hollywood Walk of Fame in 2017. It was an emotional moment for both women.

"It's an honor to be here for my friend," Streep said on Friday, according to Playbill. "Viola Davis is possessed. She’s possessed of a blazing, incandescent talent. She is, arguably, the most immediate, responsive artist I have ever worked with." Streep's Walk of Fame speech about Davis continued with much emotion and reverence for her close friend.

Davis then got to return the favor for her bestie at Sunday's Golden Globes. Speaking of their work together on Doubt, Davis revealed that she was nervous about telling Streep just how much she admired her work at the time. Now, almost nine years after the fact, Davis finally got to tell Streep just how much she has meant to her — and the world got to hear those words, too. "You make me proud to be an artist," Davis said on Sunday. "You make me feel that what I have in me — my body, my face, my age — is enough."

Behind all the glitz and glamour of Hollywood, Davis and Streep share a best friendship that transcends mere acting. It's an inspiration really, to see two such accomplished actresses have such a close and lasting friendship. That we should all be so lucky as Meryl and Viola.