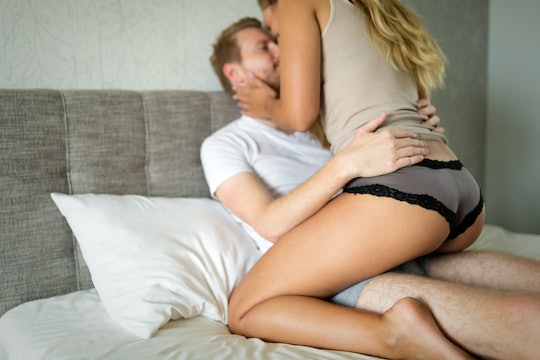 How Orgasms Change For A Man After Becoming A Father

It's easy to see how the hormonal changes in pregnancy and childbirth affect a new mother's sex drive as well as her O factor, but you don't hear as much about the ways having a baby alters the sex life of new dads. At first glance, it appears that men are sailing through the postpartum phase, having only sleepless nights on their list of grievances. But there's more happening in the mind and body of a new father than you may realize. How does an orgasm change for a man after becoming a father? It all depends on the way his hormones react to his new lifestyle.

When it comes to unexpected hormonal shifts, never underestimate the power of a baby — they may be small, but their impact is giant. As Kermyt Anderson and Peter Gray, authors of Fatherhood: Evolution and Human Paternal Behavior, explained to Psychology Today, "while the hormonal and physical changes following childbirth are nowhere near as profound or extensive in men as in women, fatherhood does appear to alter men's brains and change their hormonal profiles." These changes are directly related to a man's ability to get turned on, as well as reach climax.

The male hormone that makes the whole party possible is testosterone. But if a man's testosterone levels are low, he won't be able to achieve orgasm, because his body relies on this hormone to respond to sexual stimuli, according to Everyday Health. In the first three weeks after the child is born, new dads tend to experience an average drop in testosterone by a third of their normal production, according to Slate.

In addition to a drop in testosterone, fatherhood brings on another hormone that stands in the way or reaching an O. According to a study published in the American Journal of Physical Anthropology, emotionally involved fathers produce higher levels of prolactin, which is a hormone known to squash sexual desire. The combination of lower testosterone and increased prolactin could equal fewer orgasms for men who've recently become fathers.

But there's no need for new dads to pull the sheets over their head and mourn. If affected by hormonal shifts, the decrease in orgasms will likely be short lived. Once hormone levels return to normal, the sex drive will kick back into gear and resume business as usual.