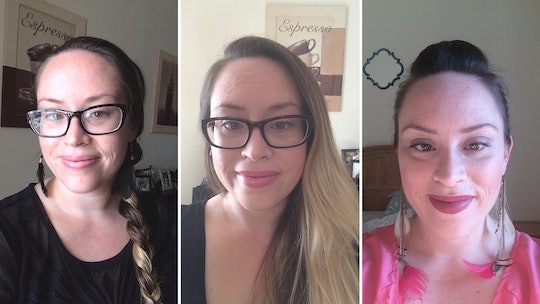 How Do People React To Different Levels Of Makeup? I Gave It 3 Weeks, & This Is What I Found Out

Growing up, I was fascinated by all things makeup. I would sneak into my mom’s beauty cabinet while she slept and have my way with her blush, blue eye shadow, and hot pink lipstick. And my love affair with makeup only strengthened during high school; I was insecure about my acne and a face full of makeup gave me confidence. But somewhere along the line, I grew up, got married, had kids, and became a work-at-home mom. I stopped wearing makeup and my once-important beauty regimen became a thing of the past. I adjusted to the “new me,” and everyone who knew me did, too.

I was a ghost of the girl in high school, the one who was red-carpet ready with a full-face of makeup. I wondered if the people who’ve only known “makeup-free me” would notice if I started adding it back on? Would strangers pay more attention to me if I looked a certain way? Would my husband? Would friends think I was taking better care of myself — or that I was going through a mid-life crisis?

I decided to do a three-week experiment, adding more makeup each week and keeping track of any comments people made about my appearance. Since my schedule varies each week depending on what I have planned, I resolved to wear makeup no less than two times a week while I was out and about. Here were the rules I set for myself:

Week 3: Heavy makeup (for my standards)

And this is what happened.

OK, so this was by far my favorite week. Going au naturale is my most common look, and I have no issues with it. I actually prefer myself this way. As a mom to a toddler and a baby-to-be, it’s easy. My arsenal of makeup consisted of a half-eaten EOS Mint Lip Balm (I have a toddler, OK?) and my Maybelline Baby Lips chapstick.

Unsurprisingly, no one — not husband, stranger, or friend — commented on my appearance. This didn’t really bother me because it was what I expected, and honestly, with the way I had been feeling with morning sickness (I’m pregnant!), I was just glad no one told me I looked like crap.

My husband had also returned from a month-long training trip for work during my makeup-free week. To be fancy, I actually let my hair down, but kept the same no-makeup routine. He came home, hugged me and our daughter, kissed me, and said, jokingly, “Your upper lip is sweaty.” Not even a, “Hey, you look pretty!” or “Hey, you’re wearing the dress I got you on my last trip to Africa!” or even the acknowledgment that I kept everyone alive in his absence.

Considering it was one of the hottest days in August and I had been running around preparing the house for his arrival and taking care of a toddler, he was actually pretty darn lucky my upper lip was the only thing that was sweaty. But thanks for pointing that out, honey!

I was not looking forward to this week, even if it was a light one. I’m usually rushing to get out of the house as it is, so forcing myself to make time for makeup was already a stretch. My arsenal included a light coat of MAC foundation, Benefit’s Dandelion blush, and a Bare Minerals’ lipgloss in a neutral shade. I timed my first application, and surprisingly I was done in 5 minutes and 32 seconds; not nearly as earth shattering as I expected it to be. I gathered up my gear and headed for my local coffee shop where I planned to spend the day working.

My usual barista said, “Here you go, Bella!” (I live in Italy) when she handed me my coffee. Typically, I just get the “here you go!” response from her, so already people were reacting to my look, and I liked that she seemed to notice me a little bit more than she usually did. Later, I ran into a friend at the store who exclaimed, “You look great!” By that point, I'd forgotten I was wearing makeup and assumed she was referring to the fact that I am pregnant and not supremely huge yet. I guess I’ll never know, but still, the compliment felt good. I didn't exactly feel great (wearing even a little makeup was hard for me), but it was nice to know that a friend saw I was putting in extra effort.

On day two, I tried to step it up a little by adding some light eyeshadow, and a pink-tinted gloss. I had to go to one of my women’s ministry meetings where I thought for sure I would get some kind of comment, but sadly, no one said a peep. I was bummed, only because I felt great about my appearance and myself in general. I thought for sure someone would say I was glowing a bit more than usual.

Overall, a week of light makeup really wasn’t that bad. I actually felt pretty good about it, especially since it really only added five-10 minutes of extra time to my daily routine. I also have to admit that I loved the fresh-faced look. The only issue I had with it, and it’s literally the same issue I have with wearing any kind of makeup at all, is that I don’t like “feeling” like makeup is on me.

When my daughter watched me put it on a few times, she was fascinated by the blush brush and mimicked me when I wasn’t using it. It was pretty cute, to say the least. I tried to keep my makeup on as long as possible so that when my husband came home from work he might notice it, but he never did. Did it bother me? Yes, and no. He’s so used to seeing me without makeup that I’m not even sure he pays attention when things change.

I’d been dreading this week even before starting this experiment. I was wearing mascara, my least favorite, a heavy foundation from Clinique, an Urban Decay Naked 3 palette, Lancome eyeliner, Bare Minerals’ blush, and a darker matte lipstick from Lancome. Application for this week took the longest, about one episode of Doc McStuffins, or 25 minutes for those who gage their time from an actual clock verses a cartoon, and I was pissed.

I even took the time to do my hair and wear jewelry, and I was feeling pretty sassy when I left the house. I felt like I was dressed for an event like the Oscars, not a day of errands and stops around town. When I dropped my daughter off at her babysitter’s, she exclaimed, “Wow! You look nice! Where are you off to?” I couldn’t help but laugh, because the truth was I was off to go lead a breastfeeding support group meeting. Turns out her comments would be the nicest I received all day — no one at the meeting said anything, though one of my friends did give a pause when she looked at me. I think if we’d had more time to talk she might’ve commented on my appearance, but the meeting was running behind so she just sat down and we proceeded with our discussion.

Later on, she told me how I was one of the few moms she knows who actually wears makeup. I secretly laughed to myself about the inside joke that only I knew: it was all for an experiment! Even though I thought it was funny, I didn't know if she was commending me for being a woman who didn't "give up her routine" once baby arrived, or if she was saying it to make a point, that most moms don't wear makeup, and they should.

I tried to go a little darker with the lips for my second outing, because I figured, why not? I was headed to a playgroup story time with a bunch of other women. I ran into a friend who I hadn’t seen in awhile because of summer vacation, and she told me I looked great. Since she didn’t elaborate on what about me actually looked great, I have no idea if it had anything to do with the makeup. I personally think that because it was the first time since I had announced my pregnancy that she had seen me, maybe she was commenting on the total package. (OK, it was probably the makeup. I know.)

After two days, I can tell you wearing heavier makeup was fun, but so time consuming. I really liked my look for day one and felt like it was date-night appropriate, but day two was not my favorite. I think it was the dark lipstick. I really don’t see myself wearing this look on the regular, but I will definitely do it from time to time, especially when I have somewhere to go. Unsurprisingly, my husband didn’t notice anything about me had changed, even though I was so sure he would — especially with the heavier eye makeup. To his credit though, we did have a night out during this heavy-makeup week and he told me, “You look nice!” At least he commented when it mattered, right?

Did I Miss Wearing Makeup?

I didn’t know what to expect when I started out on this experiment. I half-heartedly thought maybe the only people who’d say anything would be my husband or my close friends, but I was wrong. Ironically, it wasn’t the people who saw me everyday who noticed anything, it was the people I rarely see who did. It really made me think about how blind we can be sometimes, so caught up in our own worlds, our daily tasks, and going from point A to point B that we don’t even notice when those closest to us are changing right in front of us. If they aren’t noticing the makeup, what else aren’t they noticing? And for that matter, what am I missing about the people in my life?

As an adult and a woman, and as someone who isn’t seeking affirmation from others around me based off my looks, I’m not bothered that some were paying attention to my face while others weren’t. I’m really not in the business of seeking compliments like that anymore. And I can’t blame my friends for not noticing, either, because the truth is we’re all so exhausted from raising kids that the most we’re concerned with is when we’ll be able to sneak a shower or some alone time in the bathroom. As for my husband, we’ve been married 12 years and have long passed the honeymoon phase. We don’t compliment each other daily because we’re too busy raising kids, working, and trying not to fall asleep at the table.

I am, however, relieved to know the “dress to impress” pressure of my younger years no longer bothers me. My circle of friends and family care far less about how I look and are instead more concerned with what kind of person I am. After years and years of seeking acceptance through my looks, this comes as a major relief. High school was hard for me, I had cystic acne (which I’d later find out due to my PCOS) and people were quick to point it out. Wearing makeup became a shield for me, a protection that I wouldn’t leave the house without. In my mid-20s, I went on Accutane and it worked surprisingly well. As a result, makeup became less important to me.

That said, though, I will admit I was reminded of how much fun I used to have wearing makeup. Even with time constraints, I don’t see why I can’t put forth the effort now and again. I mean, afterall, I do own a mini Sephora.