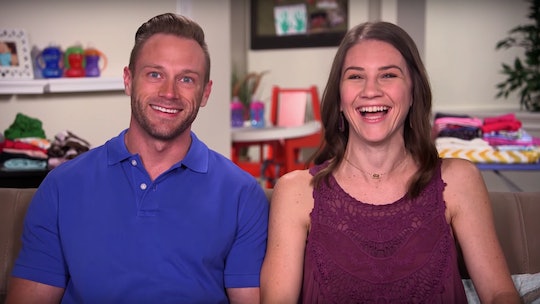 If they weren't fully aware beforehand, then expectant parents quickly discover that having a child can be incredibly expensive. In addition to the medical and hospital bills associated with childbirth itself, there's baby gear, clothing, health insurance, childcare, and much more to take into consideration. And for parents of multiples, the financial burden can seem even more daunting. Which is why fans of the TLC series OutDaughtered have probably wondered at some point: How do the Busbys afford quints?

As a refresher, Adam and Danielle Busby have six daughters together: Blayke, who's now 8; and 4-year-old quintuplets, Ava, Riley, Parker, Hazel, and Olivia. So that's a whole lotta mouths to feed, bodies to clothe, etc. And as it turns out, the Busbys have multiple sources of income to support their brood of children, according to the website, Monsters & Critics.

When Adam isn't running around a houseful of little girls alongside Danielle, he previously held down a career as a Key Account Manager for the company Intrinsic Solutions/Sprint Safety from December 2006 to July 2018, according to his LinkedIn page. As of September 2018, his LinkedIn page notes that he's the own of Adam Busby Media. As for Danielle, beyond being a full-time mom and starring on OutDaughtered, she has worked as an independent beauty consultant, according to her official TLC bio. But the cash flow doesn't stop there.

Adam and Danielle also opened an indoor cycling studio — along with four other people — in League City, Texas, called Rush Cycle, according to In Touch Weekly. Back in 2017, the Busbys stretched their already very busy lives even thinner when they opened the studio with close friends, Priscilla, Todd, Kylie, and Pete. According to the publication, the six owners live in the same subdivision and all share a passion for "being active, getting together with friends, and prioritizing faith and family." Additionally, as of August 2019, Danielle's Instagram page notes that she's the co-owner of Cadi Fitness, a fitness apparel shop.

While it's not clear if Adam is involved in Cadi Fitness, Good Housekeeping reported that Danielle and Adam also run an Amazon shop that sells camera gear and toddler essentials as well as an online clothing store. And although it's unclear just how much money these additional business ventures bring in for Adam and Danielle, I'm sure every bit helps with supporting six kiddos at home.

Which, of course, brings us to the income Adam and Danielle bring in from OutDaughtered itself. It's difficult to tell how much for sure TLC pays the Busbys per episode, of course. However, a reality producer named Terence Micahel told E! News back in 2009 that reality-TV families are typically paid 10 percent of the show's budget. Given that Michael estimated TLC programs budget between $250,000 to $400,000 per episode, that would mean Adam and Danielle could potentially bring in between $25,000 and $40,000 for a week of filming. OutDaughtered, for the record, is currently in Season 5, so they've definitely brought in a decent hunk of change so far, thanks to their reality stardom.

In November 2016, Danielle opened up to People about how she and Adam manage their finances with six young children. (This was before the indoor cycling studio was opened and they took on other business ventures, but still.) "It's been a big drop because I used to work full-time and we had two incomes coming in," Danielle told People at the time. "We had to make the call when I was pregnant, to make [the kids] a priority, and it took me away from my job... We budget and we do what we can to make ends meet and make it work."

Although it's difficult to say for sure how much income Adam and Danielle Busby draw from their various sources, they seem to have found a way to comfortably provide for their six daughters. (In fact, I'm willing to bet they're better off than most families with that many children.) I'm sure it wasn't easy in the beginning — when Danielle had to leave her full-time job to take care of the quints and Adam was the sole breadwinner — but with the help of TLC, their hard work, and their faith, the Busbys have found a way to make it all work.

This article was originally published on Sep. 22, 2018