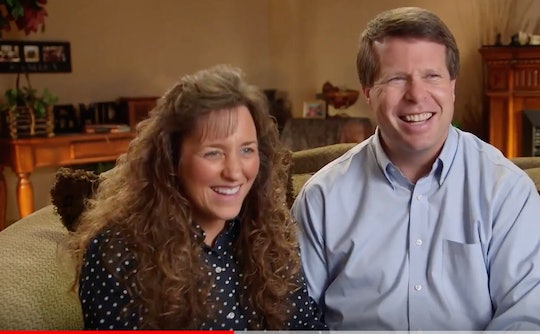 Longtime fans of 19 Kids and Counting are probably familiar with the Duggar family's mantra on spending money: "Buy used, save the difference." Over and over again, Michelle, Jim Bob, and their 19 children have repeated this phrase — and have actually shown it in action. From thrift stores, to garage sales, DIY projects, shopping at discount grocery stores, buying in bulk, wearing hand-me-downs, and more, this family has definitely walked the walk. Because of their family real estate business (combined with the wild success of their various TLC series) the Duggars probably don't have to worry about money as much as they once did. But still, having raised so many children, how do the Duggars manage to live debt-free? Apparently, it has a lot to do with their mindset.

Back in 2008, when Michelle and Jim Bob "only" had 17 children, they answered some fan questions on TODAY. One viewer asked how the Duggars managed to make ends meet with so many kids, while still remaining debt-free. And honestly, their responses were pretty eye-opening. To start, Jim Bob answered this fan question with a question of his own.

"How do [other] people pay interest for the debt on top of making ends meet?" the Duggar patriarch replied, according to TODAY. "What we've done is something that a lot of people don’t want to do. It's not keeping up with the Joneses. We've always driven older vehicles; we've never bought a new vehicle."

Jim Bob went on to explain that they shop for shoes and clothing at garage sales and thrift stores. One of the family's biggest expenses, according to the TODAY interview, is groceries — which amounted to $3,000 per month 10 years ago. (With half of their children now grown up and out of the house, I'm guessing it's significantly less these days. But still.) Additionally, the Duggars cut their own hair and make their own laundry detergent at home, as Babble reported.

Another tip? They don't use credit cards and instead, opt to purchase everything with cash. "We saved up and paid cash for our second house 18 years ago, then spent a year remodeling to get it fixed up to be livable," Jim Bob said on the TODAY interview. "But then we didn't have house payments. We don’t have any debt, so it makes it easier to live."

Even before the Duggars became a household name, they were still living debt-free. Michelle and Jim Bob credit a 16-hour financial freedom seminar by Jim Sammons for their financial success, as reported by Business Insider. "We went to a financial freedom seminar when we were young," Michelle told TODAY. "It was about getting out and staying out of debt. It really is freedom when you're not under this immense pressure every month."

After the seminar, Jim Bob bought several commercial real estate properties, which served as the family's primary source of income before their show took off, according to Business Insider. Among his lucrative endeavors were converting a chicken hatchery into rental units and renting out land to a cell phone company for its transmission tower, according to Babble.

Jim Bob shared a quote from the Bible in an interview with Parenting.com, that pretty sums up their financial philosophy rather nicely. "Romans 13:8 says, 'Own nothing but love.' There are times we've had hospital bills and stuff like that or unexpected expenses that we've had to pay off for a little while," Jim Bob told Parenting.com. To which Michelle added, "But our goal is to not go into debt." She continued:

But then you live within a certain budget and you're much more creative about how you're spending it. You look for a bargain and you learn, "This really wasn't so important" when you look at the price tag. Or you find it used in a thrift shop or a pawn shop.

I'm going to be completely honest, here. Although I've watched the Duggars from the very beginning, I wouldn't actually take their advice when it comes to most things. Our philosophies on most things are wildly different — from religion, to gender roles, home births, their thoughts on modesty, women going to college and working outside of the home, homeschooling, etc.

However, the Duggars' philosophy about money is definitely I can get behind in theory. In practice, though? While I do give credit to myself for being frugal overall, there are some conveniences I'm willing to fork out extra cash for. (Haircuts, laundry detergent, lattes, disposable diapers — I'm looking at you.) But hey, we're all free to live our own realities of "financial freedom." So as I say about most of their personal decisions, "You do you, Duggars."