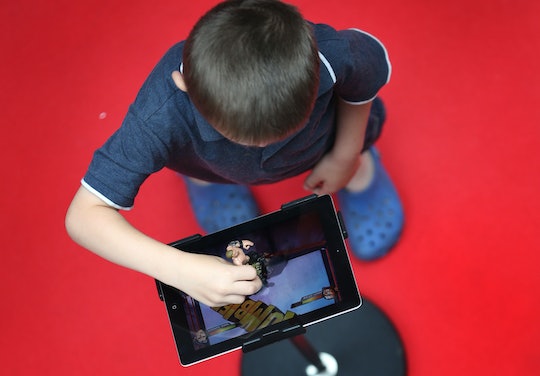 Getting babies and toddlers to go to sleep can be a tough task, and technology isn't necessarily making it any easier. At least, that's the conclusion that researchers from Birkbeck, University of London reached when they conducted the first-ever study of how touch screens affect toddlers' sleep recently. In surveying the parents of babies and toddlers between 6 months and 3 years old, the researchers found that every hour of touchscreen use resulted in 15.6 fewer minutes of sleep overall, with the children sleeping less at night and slightly more during the day than their less tech savvy counterparts.

In speaking with BBC News about the findings, researcher and lecturer in psychology at Birkbeck, University of London, Tim Smith, stressed that the findings are not definitive, nor are they a surefire sign that children in the age brackets studied should not use touchscreen devices like smartphones or tablets. In fact, Engadget noted that the same researchers previously conducted a study that concluded that using theses types of devices could help to promote motor development in toddlers. What's more, the actual amount of sleep lost because of time spent on touch screens was negligible.

"It isn't a massive amount when you're sleeping 10-12 hours a day in total, but every minute matters in young development because of the benefits of sleep," Smith told BBC News.

According to the study, which was published in Scientific Reports, family ownership of these types of devices has skyrocketed in recent years, from 7 percent in 2011 to 71 percent in 2014. Also, between 20 and 30 percent of children experience difficulties sleeping. So, it certainly makes sense to examine any possible correlation between these two factors — especially because a significant proportion of these babies and toddlers have access to and regularly use devices.

Exactly how much, though, depends on the age of the baby or toddler. Those between 6 and 11 months old, for example, use their screens for an average of about eight minutes a day, according to Live Science. The usage increased from there: 19 minutes a day for 12- to 18-month-olds, 25 minutes for 19- to 25-month-olds, and 44 minutes for those between 25 months and 3 years old. While this access to touch screens was associated with decreased overall time spent sleeping and a longer process to actually fall asleep, those who used screens were no more likely to wake up during the night than those who did not.

Sleep is so important for babies and toddlers because a developing brain's "neuroplasticity" is at its highest during those stages of life. Essentially, this is the time when they gain the ability to make new connections in their brains in response to what's going on around them, and sleep plays a major role in that process.

Although the researchers of the study said it's not necessary to cut touch screens from these kids' lives completely, the American Academy of Pediatrics recommends that babies up to 18 months old shouldn't use screens at all except to video chat. Under those guidelines, parents of those between 18 and 24 months should expose toddlers only to "high-quality programming" and should watch it with them to help them understand it. Parents should also view media with 2- to 5-year-olds, and limit their screen time to just one hour per day.

The full effects — both positive and negative — of screens on children aren't yet fully known. Staying up-to-date on new developments in related research, taking cues from their own kids, and exercising common sense are all good strategies to help parents determine what's best for their families.