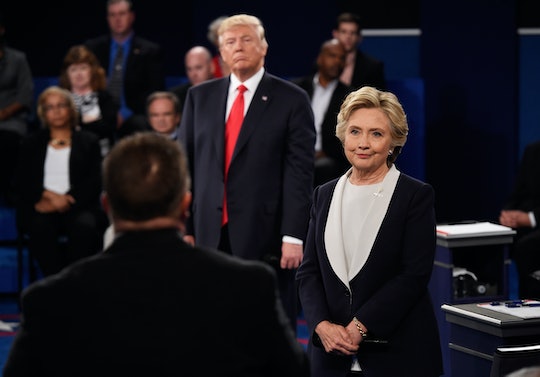 How Do Trump & Clinton Differ On Mental Health? They Don't Put Equal Emphasis On Reform

At this point, it's fairly easy to identify where Democratic presidential nominee Hillary Clinton and Republican presidential nominee Donald Trump stand on Obamacare and healthcare reform. But on World Mental Health Day, an investigation of the candidates' stance on mental health care reveals that it's a bigger part of one platform than the other. How do Trump and Clinton differ on mental health? While Trump mentions it briefly in the context of his larger health care strategy, Clinton developed a comprehensive plan for addressing some of the nation's biggest obstacles to strong mental health care.

Though mental health isn't often a central part of political campaign rhetoric, growing awareness of the need for improved mental health care options in the United States propelled the topic to a new position of prominence in 2016. The National Survey on Drug Use and Health (NSDUH) found that 18.1 percent of United States adults in 2014 had a mental illness, according to the National Institute of Mental Health. With so many Americans affected, it makes sense that mental health care initiatives would be integrated into any candidate's platform and play a central role in their approach to health care reform. Clinton and Trump both address mental health care in their platforms, but Clinton goes much more in-depth in outlining her approach.

Trump's position on health care reform includes a paragraph toward the end calling for changes to the nation's mental health care system. He wrote that families of those managing mental health concerns don't have access to the "information" and "tools" they need to ensure their loved ones get adequate care. Trump also wrote that "promising reforms being developed in Congress" deserve support from both parties, though he does not elaborate on which reform efforts he would hope to advance. Mental health is also covered in Trump's position on Second Amendment rights, PBS reported. Concerned by recent mass shootings, Trump decided that "red flags" should not be ignored. He wrote:

We must expand treatment programs, and reform the laws to make it easier to take preventive action to save innocent lives. Most people with mental health problems are not violent, but just need help, and these reforms will help everyone.

Clinton took a more comprehensive approach. Clinton's mental health agenda announced in August outlined her strategy to make care accessible and affordable to all. Under Clinton's mental health plan, early intervention is prioritized to ensure that kids, college students, and even new moms get the support they may not know they need. Clinton advised the creation of "a national initiative for suicide prevention" fueled by collaborating government agencies and administered through schools, particularly focusing on "LGBT students and students of color."

Clinton and Trump both emphasize the need to improve mental health care in the United States, but Trump has yet to write out a comprehensive strategy. It is reassuring to know, though, that both leading presidential candidates consider it a priority.