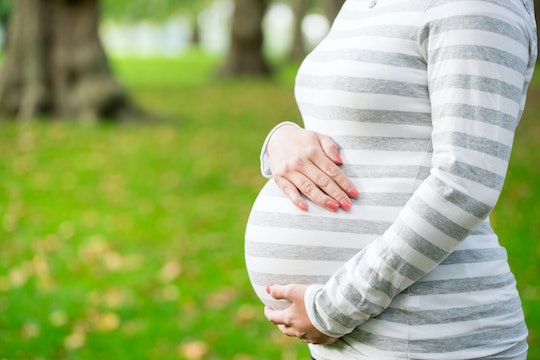 If You're Thinking Of Becoming A Surrogate, Here's What You Should Know

With the growing palaver over the Kardashian-West surrogate pregnancy, many more women are considering the idea of becoming a surrogate, whether it's for financial gain with an altruistic edge to it, or because they have found such joy in parenting that they want to spread that joy themselves by helping others who are struggling to expand their families. No matter the reason a woman might choose to step in to help a loved one or perhaps a total stranger, surrogacy is a long process, and you have to start at the beginning. How do you become a surrogate? Here's the gist of it.

In some states, it is illegal to seek out a gestational surrogate for compensation, but all states allow for a family member or friend to act as a gestational surrogate, noted Creative Family Connections. If you're still set on becoming a surrogate, either person-to-person or through a surrogacy agency, you will be required to undergo a vigorous health, mental, and financial screening process to determine if you're a potential candidate for surrogacy. After you're placed, and the legalities have been taken care of, you will begin the drug cocktail required to become a surrogate before you're finally implanted with the embryo.

How do you become a surrogate if you've decided that you're OK with the basics, and you're seriously interested? According to All Things Surrogacy, you need to decide which type of surrogacy you're emotionally capable of pursuing, and determine if you're a good candidate.

Good candidates, according to Surrogate.com and All Things Surrogacy, must meet the following criteria:

If you meet the criteria, and are going through an agency, you will then get the chance to screen the parents as much as they're screening you. Remember, you're giving birth to their child. While the onus of deciding whether or not they'll be good parents doesn't solely lay upon you, it should factor into your decision. They will be looking at everything about you from your race to your religion, as well as your education and habits, so you can and should do the same for them to the measure you find it necessary.

Then there's the legalities. According to Los Angeles family attorney Levi Wahl, a very strict contract will be written up between you, the potential parents, and the agency. This contract, Wahl tells Romper, will stipulate everything from when and if you can have sex with your partner, to how much you'll be compensated, and how much contact the parents will be afforded with you during your pregnancy. There's also the unfortunate but necessary question of possible termination of pregnancy to reduce the number or because of fetal abnormality, as well as end of pregnancy possibilities like cesarean section and unfortunately, maternal death.

After all that is completed, you're still a ways off from your due date. Many agencies will conduct a thorough psychological exam and require pre-surrogacy therapy for the parties involved. There will also be a litany of tests, drugs, and appointments before you're implanted with the embryo or inseminated. After that, it's all just appointments and delivery.

Surrogacy can be a beautiful gift for a couple who want children and are unable to have their own, but you need to be ready for the emotional and physical journey you'll be treading, and know if you're up for that or not.