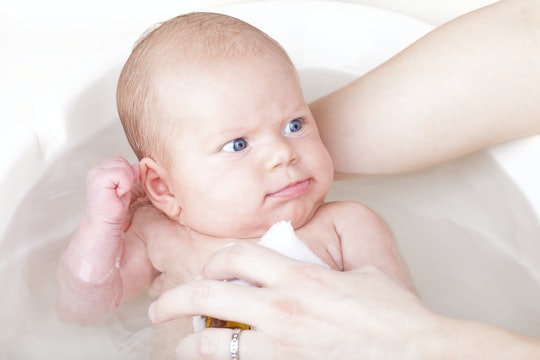 You're Probably Cleaning Your Baby's Ears The Wrong Way & Here's Why

Being totally and completely responsible for a tiny human means getting to know them pretty intimately. From cleaning an umbilical cord stump to trimming tiny baby fingernails, new parents have to learn a whole new skill set in the first few months — and a lot of it has to do with washing up. But some of those tasks aren't as easy as using a washcloth. Like how do you clean a baby's ears? And how do you prevent ear wax buildup or dirty lobes in the first place?

According to Parents, excessive ear wax buildup is often the result of caregivers using Q-tips or cotton swabs to clean the inner ear, which, ironically, is more likely to cause an excess of ear wax than cure it. So the first rule of baby ear cleaning is this: no Q-tips, not even the ones designed especially for infants. The second rule of baby ear care is to clean the outer ears regularly. "Morning and night, I clean the backs of the ears with a washcloth, soap, and water," explains Ruby Sibal of Beyond Baby Care in an interview with Romper. Sibal is a newborn care specialist (also known as a baby nurse), who has been caring for newborns and their families for years.

As long as you're not swabbing the ear canal, ear wax buildup in babies is rare. However, if it does become a problem, you might try an over-the-counter ear droplet like Debrox, as pediatrician David L. Hill, M.D. explained to Parents. If the issue persists after that, it's time to see your pediatrician. Most of the time, ear wax — whether sticky or dry — won't cause any problems, though in rare cases water can become trapped in the canal, leading to a painful ear infection, noted Baby Center. Heavy buildup can also interfere with a baby's hearing, so it's worth getting checked out if you have any concerns.

Interestingly, you're not likely to see earwax in a brand-new newborn. "There's no earwax in the beginning, but once babies learn to scream and babble, the ear wax gets pushed out," observes Sibal. "If you notice ear wax one day, and are thinking, 'Where did it come from?' well, it's the vibrations of the baby's voice."

In case you were wondering, ear wax doesn't mean your baby is dirty. (You're doing fine, moms and dads.) Believe it or not, it's actually a good thing. WebMD reported that while scientists aren't 100 percent sure why people have ear wax, it probably helps to trap dirt, water, and bacteria. (By the way, the medical name for ear wax is cerumen, which sounds a bit less gross to me.) Generally speaking, ear wax will simply fall out on its own — no harm, no foul.

So, now you know that Q-tips and baby ears don't mix, and might actually cause more buildup. You should also avoid using your finger to clear out ear wax or bits of dirt, reported The Bump. The best tool is a warm washcloth. Just remember to be gentle, as baby skin is sensitive, especially so close to the scalp and face.

For Sibal, the most important thing is to clean the outermost part of the ears daily, "whether there's dirt or no dirt." Even if your baby's ears are perfectly clean day in and day out, washing them — possibly along with a morning face wash, or right before bath time — helps your baby get used to the sensation. Hopefully then, when they're a bit older, they won't scream and shout when you decide to tackle the grime behind their ears. Sibal says that as a result of daily washing, her babies don't mind it.

More Like This
Celebrate Your Baby’s 1st Valentine’s Day With These Instagram Captions
Cradle Cap Is Normal & So Is Your Desire To Get Rid Of It. Here’s How
Covid Vaccine “Deserts” For Kids Under 5 Make It Almost Impossible For Parents To Find Shots
Does The FDA's Plan To Limit Lead In Baby Food Go Far Enough?
What Parents Are Talking About — Delivered Straight To Your Inbox