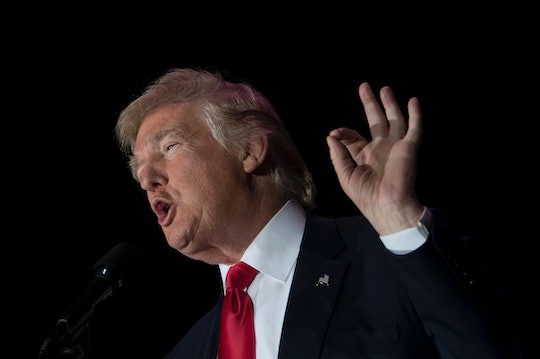 For many people who were upset that Donald Trump won the election, Inauguration Day may as well be Doomsday. So it's easy to forget that there are still people who are excited to see Trump sworn in, or who at least respect the pomp and circumstance of it all and would like to be part of it. For a presidential candidate as controversial as Trump has been, Inauguration Day will probably be pretty exciting, to say the least. So for those who want to witness the big moment, how do you get inauguration tickets?

The official way to get tickets for the 58th inaugural swearing in ceremony is to contact your local representatives and senators. Some House members are only making the tickets — which are free — available to those who live in their district. However, you've got more than one shot because you can contact your senator as well.

Some representatives have made the process a bit more official, creating forms on their websites that you can fill out to request tickets (including in my district in New York City, for example). If your local official doesn't have such a form on his or her website, you can send an e-mail requesting the tickets — make sure you remember to provide your contact information and the number of tickets you'll need!

Depending on your district, some are offering the tickets on a first-come, first-served basis; Others are holding lotteries.

In some districts, including in New York State, those who win a ticket will receive an email containing instructions on when and how to pick up the tickets, according to New York Senator Kristen Gillibrand's website. In some districts you will be mailed your tickets, but in others, such as in Florida, you will have to pick your tickets up once you get to Washington D.C.

But depending on where you live in the country, it may already be too late to get a ticket. The demand to see the festivities has been high in some districts — so high that deadlines were imposed, several of which have already passed:

In Republican districts, many really want to see Trump be sworn in, and a spot at the inauguration festivities is going faster than Hamilton tickets.

In Mississippi, Sen. Thad Cochran received almost 1,000 ticket requests, but has just 365 tickets to give away, USA Today reported. In all, 240,000 tickets will be given out.

Some websites, such as this one, are selling the free tickets for prices starting at $450; The Hill also reported tickets popping up on eBay for thousands of dollars. (For that, you could probably just go see Hamilton a handful of months later. At least it won't be as crowded.)

On the other hand, the tickets are moving more slowly in Democratic districts. A spokesperson for Vermont Senator Bernie Sanders told USA Today that there have only been 32 requests from his district's community. "We had more requests, but many were withdrawn after Nov. 8,'' said Michael Briggs.

Some people who didn't vote for Trump are interested in scoring tickets — to protest, The New York Post reported. But not everyone is pleased about that.

“I am not going to be handing out any tickets to protesters,” Rep. Carolyn Maloney told The New York Post. “I believe it’s a great tradition we have in our country of the peaceful transfer of power.”

If all else fails and you can't get a ticket to the swearing in ceremony, you'll still be able to watch the inaugural parade for most of its route without a ticket. Or you can wait for the next inauguration. Hopefully at least by then you'll have seen Hamilton.