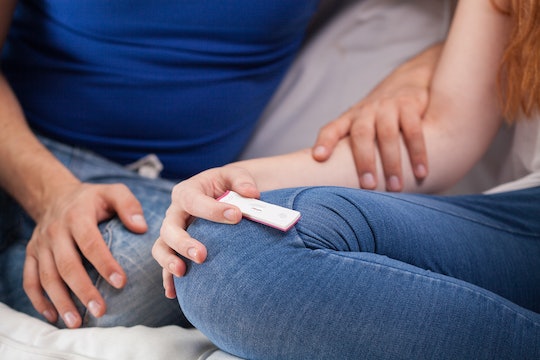 How Do You Get Pregnant After Your Partner's Vasectomy Reversal? Science Weighs In

I'm an old millennial. I'm in my early 30s, and I'm at the point in my life where friends are having vasectomies and also, second marriages. Because of that latter life change, sometimes that means that a man will want a vasectomy reversal. But plenty of women need to know — how do you get pregnant after your partner's vasectomy reversal?

When your man's had a vasectomy, it can be worrisome if you're planning to use your ovaries some time in the future. Sure, it made sense for him when he did it, whether he was single and didn't think he wanted kids, or he and a previous partner didn't want to have any more children, but now? You're ready to procreate and he's shooting blanks. You and your partner decide that he will undergo a vasectomy reversal surgery to reload with all the necessary DNA firepower to get the job done.

But it turns out, the reversal is not as simple a procedure as the vasectomy itself. According to the website for Dr. Larry Lipschultz, a urologist at the Baylor College of Medicine, it is a microsurgical procedure — meaning it's done under microscope — that reconnects the vas deferens or epididymis to vas deferens, which were surgically separated during the original procedure. If you're feeling particularly brave, go ahead and watch it done. It's fascinating, and they set it to music that sounds suspiciously like it was composed by the same people who do the music for Law and Order: Special Testicle Unit.

What are your chances of getting pregnant after a vasectomy reversal, though? They're better if your partner had his vasectomy within the last five years, according to the Northern California Fertility Medical Center. The more recent the procedure, the greater the chances of success — men who have had the surgery in the past five years experience a fertility return above 97 percent. The rates of success for men who've had the reversal even 15 years ago will see a typical return of their fertility at or around 80 percent.

That's not to say it's not a process. The Vasectomy Reversal Centers of America reported that getting pregnant after the reversal surgery is typically a six to 12 month process overall, and that at six months, it's common to start discussing the intervention of a reproductive endocrinologist just to cover all your bases. Also, if the first reversal doesn't take — they can do it again, according to the Northern California Fertility Medical Center. The success rates of a re-do are within 5 percent of initial success rates, so the level of fertility is still very high.

Before you start panicking, just remember it is still cheaper, easier, and far more successful than having a tubal ligation reversed, according to the Advanced Fertility Center of Chicago. (Because of course it is.)

If you find yourself in the position of wanting to get pregnant after a vasectomy reversal, it turns out it's a pretty great and successful surgery. But it will require planning and recovery, so make the time, and make it a priority.