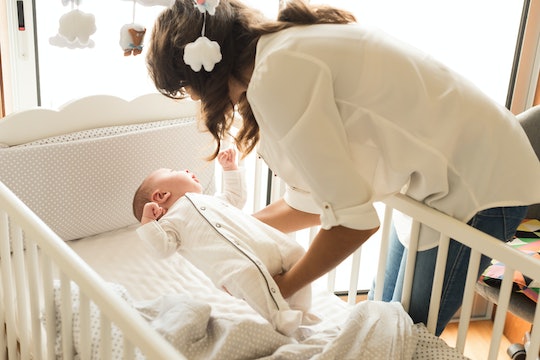 As a mother myself, I know what it's like to have a new baby at home who only wants to sleep if you're holding them. In fact, my daughter could be fast asleep in my arms, practically snoring, only to wake up the moment I put her down in her crib. So guess what I did? I held her. For hours on end and until my arms fell asleep, barely able to type the following search into my phone: how do you get your baby to sleep when you're not holding them? The good news? Despite holding a sleeping baby in my arms, I was able to search the internet for answers. The bad news? Well, there isn't really an instant fix.

According to Dr. William Sears, pediatrician and the author or co-author of more than 30 parenting books, it's best to remind yourself that newborn babies don't naturally know how to sleep on their own, and especially on a flat surface (like a crib or bassinet). Instead, they're used to sleeping curled up in a warm ball inside a womb.

So, just like a baby has to learn how to roll and crawl and walk, The Baby Sleep Site reminds parents that their babies will have to learn how to sleep, and stay asleep, on their own. That doesn't mean it isn't difficult to hold a sleeping baby for hours on end, especially when your arms start to get exhausted and you'd really like to go make a cup of coffee with both hands. Still, this phase will end.

It might sound counter to the goal of getting your baby to simply sleep, and stay asleep, on their own, but it might be wort trying to put your baby in their bassinet or crib when they fall asleep. They might wake up and protest, sure, but they might fall back asleep, too. According to The Bump, you can try putting your baby down and, if they fuss, give them just a minute or two before picking them up. The site goes on to say, "If [baby] wakes up the moment he senses he’s in the crib, resist the urge to pick him up right away."

To encourage your newborn to stay asleep, Parenting suggests caregivers employ the swaddle. The Baby Sleep Site does remind parents that it's common to feel as though baby doesn't like the swaddle initially, as they usually fight them early on, but most babies are actually calmed by the swaddle so, in the end, they'll likely settle after a few minutes of fussing. When your baby isn't ready to transition to sleeping in his or her crib all by themselves, a swaddle can make them feel as though someone is, in fact, holding them.

Baby Center says a pacifier can also be a help when getting your baby to sleep somewhere other than your aching arms. Pacifiers can be controversial, though, because they are sometimes considered sleep crutches. Then again, the American Academy of Pediatrics (AAP) says putting your baby to sleep with a pacifier can actually lower the risk of Sudden Infant Death Syndrome (SIDS), and I say that's a major plus.

In the end, if your baby loves to sleep in your arms, you might as well take it as a compliment. Sooner than later your little one will be ready to sleep on their own and, well, you might just wish you could hold them in your aching, sleep-deprived arms again.

More Like This
Even If Your Baby Sleeps Better in Your Bed, It’s Still Not Recommended
When Does A Baby Recognize Their Father? A Pediatrician Explains
What To Do If Your Toddler Keeps Taking Off Their Diaper At Night
The Best Travel Tips For Solo Parenting
What Parents Are Talking About — Delivered Straight To Your Inbox