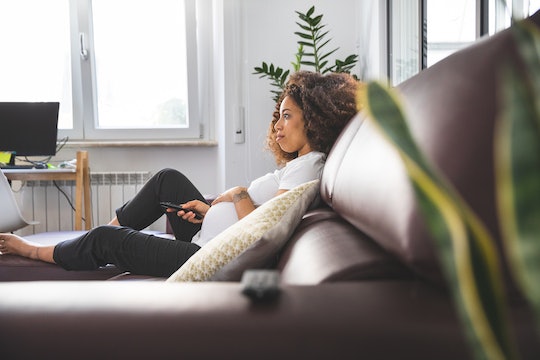 Signs You May Have Lost Your Mucus Plug, & Your Baby Is On The Way

One of the more unsettling parts of pregnancy, aside from bathroom shenanigans and embarrassing sex escapades, involves the mucus plug. It doesn't sound like the most inviting thing in the world, but the closer you get to your due date, the more you'll probably become obsessed with the mucus plug and what it means when you lose it. So, how do you know if you've lost your mucus plug? There are some signs every pregnant woman should definitely look out for, especially if that due date is right around the proverbial corner.

First, what is the mucus plug, actually? (Because it sounds scary, but it’s not really.) “The mucus plug is formed from a thick, jelly-like fluid secreted from glandular cells of the cervix, which accumulates and forms a protective seal over the inner cervical canal,” Dr. Lucky Sekhon, fertility specialist and board-certified OB/GYN, tells Romper. “[It] serves as a protective barrier, preventing the entry of bacteria into the uterus.”

Prior to labor, the plug is expelled so that the baby can pass through the cervix. Truth be told, you might not know if you've lost your mucus plug, thanks to how closely it resembles the usual vaginal discharge associated with the tail end of a woman's pregnancy. “The most obvious sign of the mucus plug 'falling out' is mucus-like vaginal discharge, which can appear clear, pink, or reddish-brown in color,” Dr. Sekhon tells Romper. “It might be noticed on toilet paper when wiping after using the bathroom. Passage of the mucus plug could go totally unnoticed.”

When can you expect to part ways with your mucus plug? Dr. Michael Cackovic, M,D., OB-GYN at the Ohio State University Wexner Medical Center in Columbus, told The Bump that a woman typically loses the mucus plug after 37 weeks gestation. You are physically capable of losing it earlier, but, because losing your mucus plug can be a sign you're going into labor, shedding it earlier than 37 weeks could indicate that you're in the beginning phase of preterm labor. You should definitely call your doctor if you suspect you have lost your plug way before your due date.

You can lose your mucus plug at anytime. “Loss of the mucus plug is not provoked by any particular activity, whether it be sitting on the toilet or showering. It’s possible that a cervical exam where the membranes are stripped could result in a higher chance of the mucus plug being lost and the start of labor, due to the release of prostaglandins which cause cervical ripening and contractions,” Dr. Sekhon tells Romper. You can look out for a reddish brown, stringy mucus or a sticky discharge

Labor might not start immediately, or even soon, after you've lost your mucus plug. But MucusPlug.net (yes — there is such a site!) says you should definitely pay attention to dull, aching pains — likened to menstrual cramps — after you've noticed you've shed your mucus plug, because it could signify contractions are forming and labor is, in fact, on the way. Although, the site goes on to add that the mucus plug might not come out all at once, making it harder to spot.

If you're pretty sure you haven't lost your mucus plug, and you're close to your due date, there's no need to worry. Dr. Charles Ascher-Walsh, M.D., director of the division of gynecology at Mount Sinai Hospital in New York City, told The Bump, “The loss of it has no real importance other than serving as a sign that labor may be soon." So really, the important point to note is how far along you are if you think you may have lost it. Otherwise, no biggie.

While you might not meet your baby for weeks after losing the plug, if you do noticeably lose your mucus plug, and are in the "safe" zone for labor and delivery, it's important to note any other signs of labor (which may include your water breaking, cervical thinning, and, of course, those lovely contractions).

Losing the mucus plug is, honestly, just one sign labor is approaching, so there's no need to put all your focus on whether or not you've lost it. “It’s completely fine if you haven't lost your mucus plug or gone into labor by the time of your due date,” Dr. Sekhon tells Romper. Though, if you're approaching 42 weeks your obstetrician will likely recommend induction of labor, Sekhon adds. Aside from that, prepare to practice a lot of patience.

This article was originally published on November 8, 2017