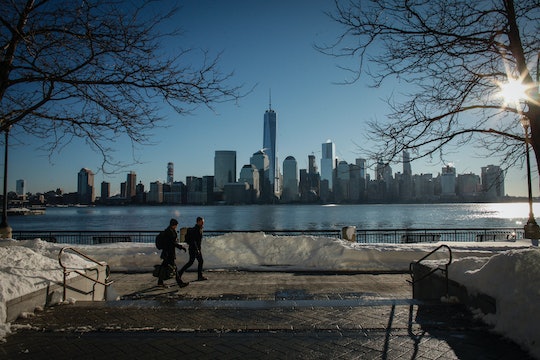 How Do You Qualify For New York’s Paid Family Leave Policy? The State Has Set An Amazing Standard

With more moms than ever working outside the home, paid family leave is not just a major perk: for many families, it's key to financial stability after a child is born. Though plenty of states don't offer much support to new parents, New York is about to make it easier for moms and dads to cut childcare costs and treasure the earliest days of a baby's life. How do you qualify for New York's paid family leave policy? The requirements are inclusive, but it will be a few years before anyone is able to take advantage of the changes.

This week, New York Gov. Andrew Cuomo announced both a statewide shift to a $15 minimum wage and a more substantial family leave policy, The Wall Street Journal reported. The plan is designed to ensure that employers will ultimately give employees in need 12 weeks of paid time off. It doesn't just benefit new parents: anyone caring for a severely ill family member or covering for a family member serving in the military will be eligible for the assistance. New York is making history by providing the longest paid leave of any state, but there are requirements that need to be met in order to take advantage of the policy.

New York's new family leave policy is more flexible than the existing Family and Medical Leave Act, according to New York Magazine. Anyone working full-time or part-time qualifies, and the size of one's employer doesn't have any influence on whether they get paid leave. In order to be eligible, an individual must have worked for their employer for a minimum of six months. But since both men and women can get paid leave, both parents will likely be able to take time off to care for a child.

Unfortunately for expecting moms, the policy won't kick in right away. The plan will be put into action in 2018 but will only guarantee eight weeks leave in the beginning, Jezebel reported. Companies will hit a benchmark of 10 weeks in 2019 and 2020, according to New York Magazine; the full 12 weeks won't be required until 2021.

New York's policy is a monumental step forward, but the rest of the country has a long way to go to catch up. The Family Medical Leave Act only guarantees 12 weeks of unpaid leave for an employee during a given year, according to NPR. All other OECD countries have national paid maternity leave policies in place (the U.S. is the only developed nation without a nationwide paid family leave policy). The United States Department of Labor even launched a campaign, #LeadOnLeave, encouraging more progressive policies.

In a 2015 report, "The Cost of Doing Nothing," the DOL emphasized that paid leave plans built on "a small payroll contribution" from each employee minimize the cost to the employer and prevent costs associated with hiring new talent — this is the model New York is implementing. The DOL went on to emphasize the impact of paid leave on individuals, particularly women: when a policy isn't in place, women's economic security and long-term earnings potential suffers.

It will be years before New York families see the benefits of the new policy, but it may be life-changing.