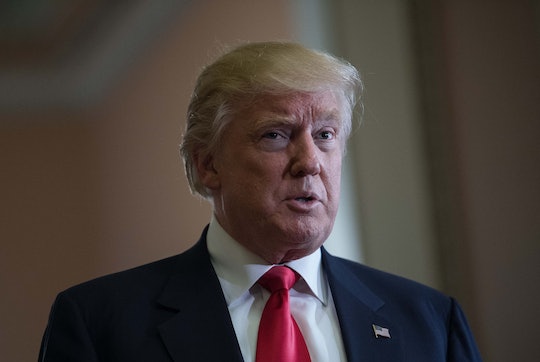 How Do You Repeal A Law? Trump Has Promised To Roll Back At Least One

President-elect Donald Trump made a lot of promises over the course of his campaign, and while many of his supporters are hoping he keeps his word on the important issues, an equal or greater number of his opponents are fervently hoping that he never follows through. Chief among these promises is Trump's vow to repeal and replace Obamacare. But how do you repeal a law? It is not an easy process, despite all the campaign rhetoric, but Trump can still cause a lot of damage to Obama's signature achievements.

On the campaign trail, Trump talked often about repealing the Affordable Care Act, and he has the enthusiastic support of Republicans in the Senate and the House of Representatives. But Republicans don't seem to have come up with a detailed alternative at the moment, so if Trump succeeds in repealing the law, millions of Americans could lose their health insurance. And Trump himself may be having second thoughts — after he met with President Barack Obama, Trump told The Wall Street Journal that there were parts of the law he'd be interested in preserving, like the provisions allowing young people to stay on their parents' heath insurance, and the rule that insurance companies can't discriminate against people with pre-existing conditions.

On top of that, it would probably be impossible for Trump to successfully introduce legislation repealing the ACA in its entirety. Senate Democrats can filibuster, and Republicans are unlikely to garner the 60 votes needed to overcome that.

That said, there are still plenty of ways for a Trump administration to destroy the ACA without repealing it in its entirety. The New York Times points out that Republicans can use a filibuster-proof budgetary process called reconciliation to get rid of parts of the act, like the penalty against people who don't have health insurance, and subsidies meant to help middle-class Americans buy insurance on state marketplaces. (As many have pointed out, if these sorts of provisions are struck down, the whole law essentially falls apart. If companies will cover pre-existing conditions and healthy Americans aren't penalized for not having insurance, many people will just wait until they get sick to buy insurance, and then costs will skyrocket.)

In fact, congressional Republicans have already passed such a reconciliation bill. Obama just vetoed it when it reached his desk. Trump, on the other hand, would be likely to sign.

As for Trump's other promises, like getting rid of Roe v. Wade? That takes appointing enough Supreme Court justices who are committed to overturning the law, which is a real, although less-than-certain, possibility. And there are plenty of Obama's executive orders on things like immigration and torture that Trump can cancel without having to go through the repealing process.

But, you know, emails.