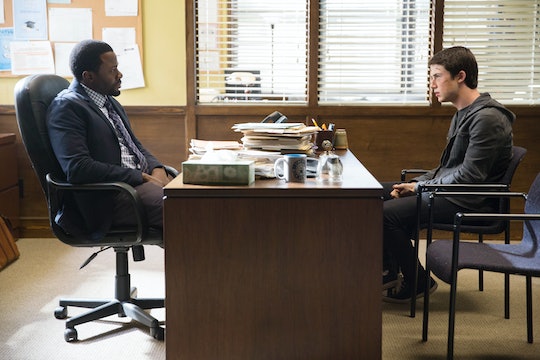 '13 Reasons Why' Ends Very Differently In The Book

The 13 Reasons Why Netflix series is set up like a mystery thriller of sorts, as viewers follow Clay Jensen as he listens to the tapes Hannah Baker left behind before she committed suicide. Along with the tapes that takes viewers through Hannah's past, in the present her parents are suing the school and the impending lawsuit has all of the classmates on edge. Though the show is based on the bestselling novel by Jay Asher, people who've read the book may have also been shocked by the show's ending because it's so different. So how does 13 Reasons Why end in the book? The answer may surprise you. Warning: book and Episode 13 spoilers ahead!

Compared to the show, the novel was more simplistic. There was no lawsuit in the novel and readers didn't get to know the characters like they do on the show. In the novel, the story just followed Clay as he listened to the tapes, going around town to the places Hannah mentioned, all throughout the course of one single night. While he did run into some others that were on the tapes, the story was mainly about Clay and Hannah — no one else.

So the novel ended with Clay, finishing the tapes and mailing them off to the next person — who in the books was Jenny, though her name was changed to Sheri in the series. After that, he went to school where he saw his old friend Skye and he walked up to her, saying her name. The end.

It's assumed that after what happened with Hannah, Clay realized that he should reach out to people while he still could, before it was too late and to make those around them feel like they aren't alone in the world. A similar scene does occur in the show, but it wasn't the final scene.

As for the series, Alex shooting himself and Tyler's worrisome collection of guns was never part of the novel at all, which makes me wonder if this is the show's way of setting up for a potential second season. It certainly feels that way to me. But whatever the reasoning is behind the change-up, the meaning of the show and book is the same: the things you do affect other people, no matter how small your actions may seem.