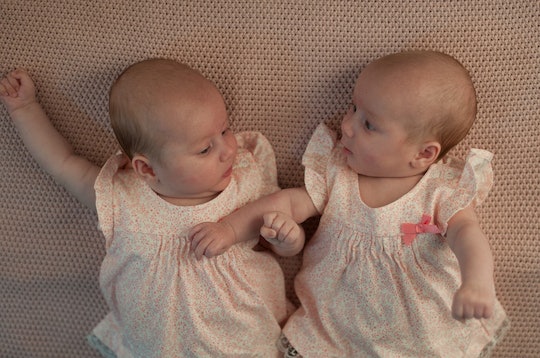 "Hey, You Look Familiar." How Baby Knows Its Twin

Have you ever had the feeling, when meeting someone for the first time, that it's not actually the first time your paths have crossed? You two just "click," making it seem like you go back further than the 10 minutes you've been chatting. Imagine that feeling multiplied by 1,000, and you may begin to understand the connection between twins, a pair whose bond begins at conception. But how does a baby know its twin when they haven't even been in the world for long? It all starts in the womb.

You'd be hard pressed to find a more intimate living situation than a uterus. Hanging out together from the moment they become zygotes, twins start out life knowing nothing other than being one part of a pair, and they get a kickstart on their social life by interacting with their womb-mate. According to the website for Scientific American magazine, as soon as 14 weeks gestation, twin babies begin to acknowledge and connect with one another. It starts with gentle reaches toward their neighboring sibling, and progresses from there. What's known about this early form of non-verbal communication comes from observing twins in the womb with four-dimensional ultrasonography.

In a study published in the journal, PLos One, researchers set out to see if twin interaction in the womb was intentional, or merely random movements in a very constricted space. What they found through watching five pairs of twins make contact while in the uterus is that the babies were doing more than accidentally bumping into one another. Around 18 weeks gestation, twins were touching one another in very thoughtful ways — leaning in head to head, reaching out arm to head, and gently rubbing one another, being extra cautious in sensitive areas, like the eyes, as Everyday Health explained.

These results show that twins are not only away aware that there is another someone like them nearby, but they crave touch and connection with their twin before birth. I guess you could say that knowing your twin is just something you're both with.