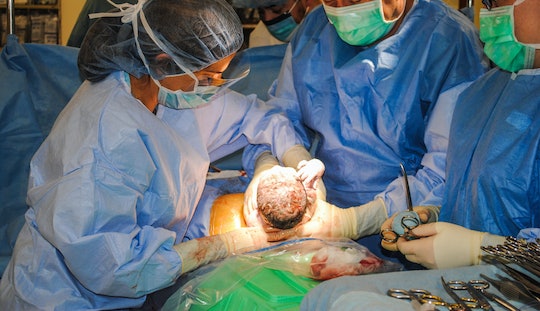 How A C-Section Delivery Affect Baby Later In Life

There has always been a lot of talk surrounding C-section births, and mostly in a very polarized manner. C-section critics claim that this type of birth isn't "real" or "natural." Those who support the delivery method say all births are "real" and "natural." One thing both sides have in common is that they often focus on the mother, and not the baby. Some may be wondering, how does a C-section delivery affect a baby later in life? What are the physical and emotional affects on the baby? As it turns out, there are many theories to consider.

According to LiveScience, roughly one third of all babies born in the U.S. are born via C-section. The recovery from a C-section birth is typically longer than a vaginal birth, six weeks versus four weeks (that's assuming no complications for both) as explained on Web MD. There has been a push in recent years to reduce the number of C-sections, at least the ones that aren't medically necessary, as length of recovery for the mother is considered as well as, possible negative physical impacts on the baby.

"There is no evidence that a Cesarean delivery impacts a baby in the long rung emotionally, but there is research to suggest that these children have a higher incidence of asthma and respiratory tract medical concerns," Kristin Mallon, a midwife at Mindful Midwife in New Jersey, tells Romper. A 2012 study done at Yale backs Mallon up on this claim - at least partially. Researchers presenting at the 32nd Annual Society for Maternal-Fetal Medicine (SMFM), claimed that premature babies born via C-section had a 30-percent increased risk of respiratory distress compared to babies born vaginally. The researchers postulated that it could be because babies born by C-section do not pass through the pelvis, which normally squeezes fluid from the lungs. (It's important to note, this study was conducted with premature babies and not full-term babies.)

Another claim that's been floating around is that C-section births cause issues with brain development in babies. "A 2015 study alleged a child's brain development is changed. I don't believe this." Dr. Darius Russin tells Romper. "I have known many children delivered through C-sections who are perfectly well as adults in physical and mental health." The study Russin is referring to, published in Springer’s Journal Attention, Perception, & Psychophysics, claimed a baby's brain development is impacted if they're born via C-section. The researchers monitored the eye movements in a group of 3 month olds to gauge what caught the babies' attention. According to their findings, a C-section birth experience influenced the babies' ability to concentrate. They concluded that C-sections slowed spatial attention in babies. No other studies involving human babies have been done in recent years, only mice babies.

Alas, the debate over which is healthier, a vaginal birth or a surgical birth, wages on. Given the information available, one could assume there are no long term impacts on babies born via C-section. However, it's obvious that there is still so much to explore in the area, medically speaking, to determine long-term affects if any on the baby. The most important thing that people can do is simply support mothers, in whatever birth experience they have.