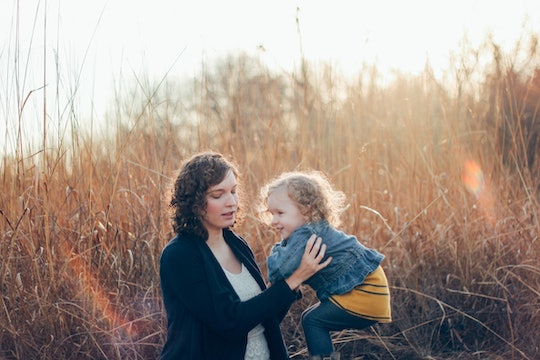 How A Parent's Weight May Affect Their Kids

Healthy parents set a positive example for children. When parents are unhealthy, on the other hand, the negative effects appear to be felt early on. So how does a parent's weight affect their kids? A new study researched by the U.S. National Institute of Child Health and Human Development suggests that early developmental delays in toddlers might be related to having obese parents, which may significantly hinder the toddlers' fine-motor and social skills.

Examining data from 5,000 couples, the study found links by examining parental obesity alongside a developmental questionnaire. The questionnaire inquired about various fine-motor skills for the toddlers, asking whether or not the toddlers possessed the ability to execute tasks like stacking toys. Lead researcher Edwina Yeung explained: "Mothers' obesity was associated with a delay in achieving fine-motor skills, and fathers' obesity in achieving personal and social skills — that includes skills for interacting with others." What's more, "when both parents were obese, it meant longer time to develop problem-solving skills," Yueng shared. The personal-social skills for toddlers part of the assessment, which looked for children's ability to feed or dress themselves, showed that children with obese fathers were 75 percent more likely to fail.

The results, however, are not completely conclusive. "We only have correlations between parents' BMI and children's scores on a screening questionnaire," Yueng explained, sharing that, in addition to other postulations such as the theory that blood sugar levels or nutrient deficiencies might be a cause of developmental hinderances:

Obesity is correlated with a rise in inflammation and in hormones that regulate body fat and metabolism. One theory is that these hormones might influence the development of the baby's brain.

Still, the study does suggest that "obesity could affect the expression of genes in sperm," shifting the sole focus from a mother's pre- and post-pregnancy weights into a dual focus on both parents' health.

Scott Johnson, professor in developmental psychology at the University of California, Los Angeles, wasn't involved directly in the study. However, in his assessment of the findings: "It wasn't clear ... how that general property [of maternal obesity] induces specific deficits in fine motor skills."

"It's really important to stress that these results need to be confirmed by other studies," Yueng agreed. Regardless, Yueng stressed, "We know that obesity greatly increases the risk for such conditions as heart disease, diabetes and stroke. For anyone, male or female, pregnant or not, it makes sense to attain a healthy weight."