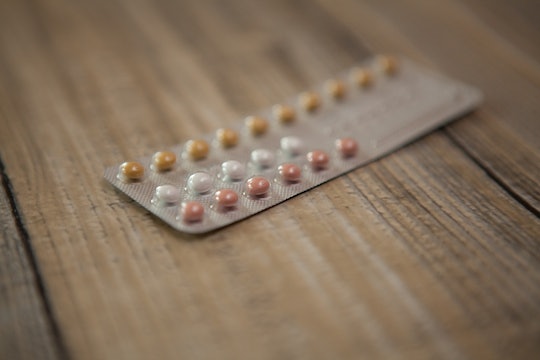 Activated charcoal is trendy af. From face masks to pressed juice, the mysterious, jet black hue feels so dangerous, which is likely the reason why it's so attractive to foodies. But be warned: There are some definite negative effects to ingesting activated charcoal, especially where pregnancy prevention is concerned. So how does activated charcoal make birth control less effective, you ask? It all comes down to the properties that made activated charcoal a health trend in the first place.

Activated charcoal is a detoxifier that "[traps] chemicals and prevents their absorption," WebMD notes. Powdered activated charcoal has been used to whiten teeth, clear up acne in spot treatments, and it can even be helpful in emergency situations where poison has been ingested. If you're just drinking it casually in a pitch black lemonade, sans any previously ingested poisons, the stomach detoxification still happens. Activated charcoal is first and foremost intended for specific, emergency use, and this is where the birth control downfall comes into play.

"If you’re drinking it and you also are on any meds, even birth control pills," gastroenterologist Patricia Raymond, M.D., told Women's Health, "the charcoal is likely to absorb the drugs. So you risk having them become ineffective.” Raymond is against recreational activated charcoal use, reminding: "Activated charcoal is given to people who take too much medication because charcoal is so absorbent and can counteract an overdose," so it's nothing to take lightly. Though it seems harmless, activated charcoal drinks (or ice creams or lattes or breads) can be hazardous — not just for birth control pills, but for any ingested medications.

But before you throw away your tin of detox powder, there are a few precautions you can take to lessen your risks. "Waiting at least two hours between taking activated charcoal and other prescription drugs," Eater observes, would definitely help. Also, it really depends on the amount of activated charcoal ingested, which is controlled by the vendors. Minimal amounts wouldn't likely absorb a medication, but if someone else has prepared your treat, there's no way of knowing how much you might ingest.

There are plenty of other detoxifying ingredients that can pick up the slack if you're looking to avoid activated charcoal. Yes, they're not as creepy or as daring, but they'll do the job; Lemon, ginger, and apple cider vinegar are great ways to cleanse and balance the body. They won't leave black grit in between your teeth, but that kind of sounds like a good thing, don't you think?

Waiting a couple hours and limiting your intake should keep you in the clear but, as always, ask your doctor about the interactions between activated charcoal and birth control; They certainly have the final say. For now, the safe consensus is to keep everything in moderation so that you're not surprised a month later.