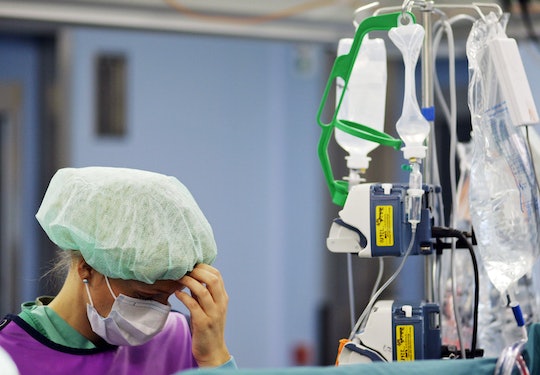 How Does Anesthesia Affect Unborn Babies & Children ? It Could Harm Brain Development

Going under general anesthesia is never a fun thing. While anesthesia does help to make pain during surgery go away, it can definitely be a scary process being put under. There are a number of risks doctors should consider before putting pregnant women and young children under and a new FDA warning is reiterating this sentiment — young children are at risk due to prolonged exposure to anesthesia. Due to new warnings, women might wonder how anesthesia affects unborn babies and children — because new research has found that anesthesia can harm the brains of children under 3 years old.

The FDA issued a warning on Wednesday about the repeated use of anesthesia on young children under the age of 3 and pregnant women during their third trimester of pregnancy. According to the FDA, the use of general anesthesia for a repeated or lengthy time could have an affect on children's brains and even the brain of an unborn baby.

There are times where women or young children simply have no other choice but to go under anesthesia due to medical risk — in situations like these, it is completely necessary and totally unavoidable. However, the new FDA warning is advising parents and expecting parents to talk to their doctors ahead of time, if possible, so they understand the risks.

But how does anesthesia affect an unborn baby and why should mothers be concerned?

According to The Washington Post, pregnant women who are using anesthesia for more than three hours at a time could experience the widespread loss of nerve cells — which is associated with long-term effects on learning and behavior, therefore potentially affecting the brains of unborn babies, before they're even out of the womb. These effects have been demonstrated on pregnant animals and young animals, according to the FDA, whose brains yielded similar results to those of humans.

Furthermore, according to American Pregnancy Association, another risk of using anesthesia during pregnancy is that it could potentially "decrease ... uterine blood flow." Those who go under anesthesia for a single or short period of time should be okay, according to the FDA. But more research needs to put in to examine the long term effects that anesthetic exposure has on brain development in fetuses.

Dr. Janet Woodcock, director of FDA's Center for Drug Evaluation and Research said in a statement:

... The repeated or lengthy (more than three hours) use of general anesthetic and sedation drugs may adversely affect children's developing brains. To better inform the public of the risks, we are requiring warnings to be added to the labels of these drugs. We recognize that in many cases these exposures may be medically necessary and these new data regarding the potential harms must be carefully weighed against the risk of not performing a specific medical procedure.

Because of this study, warnings will now be added to the labels of general anesthetic drugs. However, according to the FDA, pregnant women should not hesitate or delay going under anesthesia to delay life threatening surgeries such as appendix removal, gallbladder removal, and surgery for traumatic injury. Other studies have found that expectant mothers should be okay when going under a little bit of general anesthesia. According to Mother To Baby, only 2 percent of women require surgery during pregnancy — and when they do, different studies have found that there is no correlation between surgery and anesthesia in the first and early second trimester of pregnancy with birth defects.