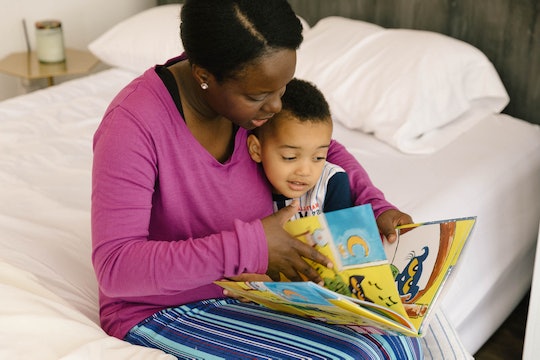 Here's How Being A SAHM Affects Your Kid

After I had my first child, I kind of fell into being a stay-at-home-mom (SAHM). I hadn't planned on it, but we had moved halfway across the country when I was six months pregnant, and I hadn't been able to find a job yet. I was a little surprised by how I adjusted to being a SAHM — I always thought it might be something I'd want to do, but now I wasn't sure. I couldn't help but analyze every aspect of my days, and I was constantly wondering, "how does being a SAHM affect my kid?"

More Like This
What Parents Should Know About The New CDC Mask Guidelines
30 Cheap & Easy Summer Activities For Kids
18 Best Sand Toys In 2021 For Babies, Toddlers, & Kids
This Is Why Your Toddler Wants To Feed You All The Time

When it comes to the working mom/stay-at-home mom conversation, the debate can get intense. According to The Washington Post, the national rate of working mothers is on the rise, and it's projected to continue on that trajectory as rising child care costs, limited paid maternity leave, and loss of job security push mothers back into the workforce soon after delivery. It's important to note that many mothers don't have the ability to weigh how being a SAHM affects their kids — they work because they have to.

As far as how having a SAHM affects a child, the research is mixed.

According to Stanford's Graduate School of Business (GSB), there is evidence to suggest that having one parent at home can be very beneficial during a baby's first year of life. But, as the GSB mentioned, a new study suggested that the benefits can last past that first year, well into a child's elementary and middle school years.

That study, conducted by Stanford's Graduate School of Education, concluded that the latest findings indicate that parents continue to be important much further along in a child’s life than previously thought, and even older children can benefit from having a parent at home.

To further explore how stay-at-home-motherhood affects children, the editors of TIME surveyed 1000 adult children of both working and stay-at-home mothers. Most of the children who grew up with working mothers felt they thrived because of it, particularly daughters with working mothers. But, TIME also noted that the question shouldn't be whether or not mothers should stay at home, but if a child will turn out differently because of that choice. In that case, the survey results point to no. Children of both working and stay-at-home-mothers were as happy, attended college, were employed, and had families at the same rates.

Choosing whether or not to stay at home can be a very personal decision, based on a lot of factors. As the research suggests, there can be benefits to either choice. What can be more impactful is how you feel about the decision you make and how happy you are with it. For me, working part-time gave me a fuller sense of accomplishment and allowed space for creativity and focus in a field for which I cared, which resulted in me being a more patient and present mom. If you have the option to weigh your choices, be sure not to discount your own self, needs, and wants from the equation. Your own fulfillment and happiness could impact your child more than the decision of whether or not to stay at home.