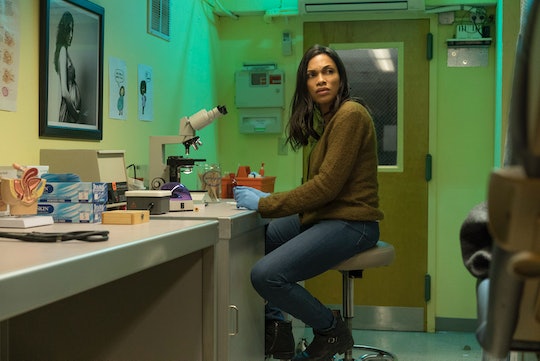 When it comes to the Netflix Marvel Cinematic Universe there's one common thread through the shows: Claire Temple. The bad ass nurse first appeared in Daredevil and then in Jessica Jones. Now she'll also be appearing in the upcoming Luke Cage but how does Claire even know Luke Cage? Claire first met Luke when she healed him after he was gravely injured by Jessica. Realizing that Luke's skin was impenetrable Claire discovered she was once again working with some kind of superhero but there's more to Claire and Luke's relationship than just what we saw in Jessica Jones.

In the Marvel Comics Claire is actually a doctor and she's also one of Luke's early love interests. Claire works with Dr. Noah Burstein who recruited Luke as volunteer for an experimental cell regeneration serum that gave Luke his abilities while he was in prison. Claire and Noah work at a storefront clinic, which is where Luke first meets Claire. Luke goes to the clinic after he's been shot, which is how Claire discovers his skin is unbreakable. Claire is then kidnapped by Luke's enemy, Diamondback, and Luke rescues her leading to the start of their romance.

While they continue dating, Noah keeps Luke's secret about him escaping from prison. Of course, this becomes an issue later but when Claire learns the truth she ultimately accepts it and moves on. Due to her relationship with Cage, Claire is repeatedly kidnapped and at one point she's even wrongly accused of killing one of Luke's foes, reporter Phil Fox. Thankfully, Luke finds the real killer and Claire is freed from prison. Claire and Luke date for years but Luke worries his line of work puts Claire in danger, which technically it does. Still they stay together for a while until finally Claire can no longer handle his lifestyle and the fact that he is always putting himself in danger.

The two still interact from time to time but for the most part once they split up and that's the last they really see of each other. It'll be interesting to see how much of what occurred in the comics will take place in the Luke Cage show. Both Diamondback and Claire will be in the first season, though, so there's a very good chance Claire may be kidnapped during the season, which really shouldn't surprise Claire at this point. Honestly, Claire should probably get some new friends; she's always in danger because of these people.

To see what exactly happens between Claire and Luke, watch the first season of Luke Cage on Netflix beginning on Sept. 30.

More Like This
The Shocking True Story Behind Hulu’s New True Crime Series Candy
Priyanka Chopra & Nick Jonas Share First Photo Of Baby After Over 100 Days In NICU
Kate Middleton Explains Why Her Kids Couldn't Attend The Top Gun: Maverick Premiere
Prince Harry & Meghan Markle Could Take Us Inside Their Home For A New Docuseries