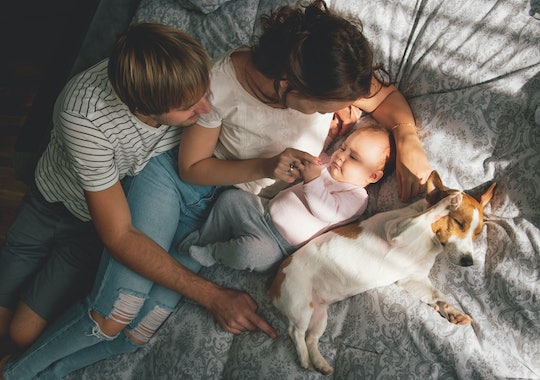 Co-Sleeping Can Impact Your Partner In Big Ways

The vast majority of articles written about co-sleeping focus on the topic from the perspective of the mother and child. But even research concerning family beds seems to forego an important factor: how co-sleeping affects your partner. Although looking at it primarily from the mother's perspective is natural — she's the one who will likely sleep closest to the baby, nursing them through the night — it's not a great idea to simply ignore the viewpoints of the fathers or non-nursing parents who will share the bed too.

Co-sleeping, like all family activities, looks different for each family. Some families co-sleep during nap time only. For some, multiple children share the bed with the parents every night. For others, co-sleeping only happens on rare occasions like when their baby is teething or having a sleep regression. Whatever the arrangement, most experts, like the researchers at the Mother-Baby Behavioral Sleep Laboratory, recommend that both parents be 100 percent committed to co-sleeping. If both aren't on board, it will create a dreaded rift in their relationship.

Starting off with the positive, there are several benefits of co-sleeping for the non-breastfeeding parent. For example, a piece published in Scientific American discussed how co-sleeping may lower testosterone levels. Now, before any fathers get up in arms, hear me out. The article went on to say that these lowered testosterone levels are likely due to the physiological changes that happen when they're sleeping in close proximity to their child. It would suggest that the care and attention they're paying their child during sleep has a positive effect on the father-child bond, much like the mother-child bond. Similarly, for fathers who work outside the home, co-sleeping can be a sweet time to make up for lost hours during the day.

Furthermore, in cases where both parents are on board, co-sleeping has also been shown to have a positive effect on their marriage or relationship. Granted, things won't be the same in the bedroom once your child is sharing a bed with you, but getting creative with where, how and when you have sex is generally a positive thing for couples.

There are, however, a few downsides that fathers may worry about despite the other benefits. Namely, What to Expect noted, loss of sleep. Although it depends on the type of sleeper the partner is (my husband wouldn't wake if our child was crying in bed next to him,) many non-nursing parents complain of getting much less sleep after co-sleeping.

Co-sleeping may be ideal for the breastfeeding mother to get more sleep, but if both parents aren't on board, experts recommend not using the sleep method. Discussing the pros and cons with your partner before making the decision to co-sleep or not will ensure that you experience only the positive sides of the sleep method.