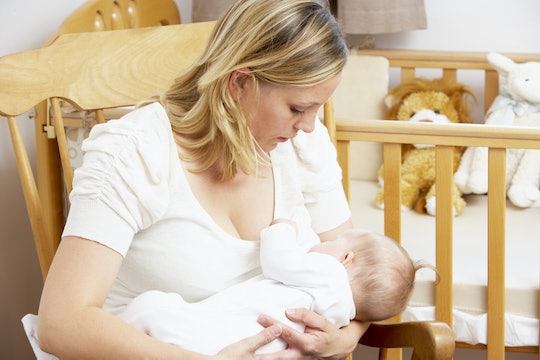 How D-MER Affects Your Ability To Breastfeed

Breastfeeding is rarely easy right off the bat, but for some women it is made almost impossibly difficult through no fault of their own. Dysphoric milk ejection reflex, or D-MER, affects a small percentage of moms. And for the mothers it affects, the results can be disheartening and scary to handle. But what exactly is this breastfeeding problem and how does D-MMER affect your ability to breastfeed?

According to the National Institutes of Health, D-MER is a sudden emotional "drop" that occurs immediately prior to their letdown reflex and typically lasts for a few minutes afterwards. The emotional drop is thought to be caused by a sudden drop in the "feel good hormone" dopamine that typically rises when mothers breastfeed. The drop causes a legitimate feeling of depression and a physical dopamine deficiency in women who experience it.

It's important to point out that D-MER is not the same thing as postpartum depression or anxiety, although it brings on similar feelings only during the minutes before and after the milk ejaculation reflex. According to the Australian Breastfeeding Association, mothers who experience D-MER are still physically able to breastfeed. The condition, however, will likely influence their feelings towards breastfeeding in general if not handled properly.

The Australian Breastfeeding Association also noted that D-MER ranges in severity. Some women describe the feeling as a "sigh" or mild feeling of concern, while others describe it as severely as suicidal or a desire to self-harm. Although D-MER generally improves after three months postpartum, dealing with its side effects is no easy task.

The National Institutes of Health stated that since D-MER is only recently recognized there aren't as many treatment options available as experts hope to see in the future. However, since the condition can sometimes lead to an unwanted cessation of breastfeeding (and understandably so,) mothers experiencing negative feelings upon letdown should seek help from a lactation consultant or psychologist as soon as possible.

More Like This
Ashley Graham On The “Fun, Organized Chaos” Of Raising Twins
Abbot's Formula-Producing Plant Can Reopen In As Early As 2 Weeks — Now What?
Can You Help Your Baby’s Hair Grow?
Here’s What You Need To Know About That Viral 1960s Baby Formula “Recipe”