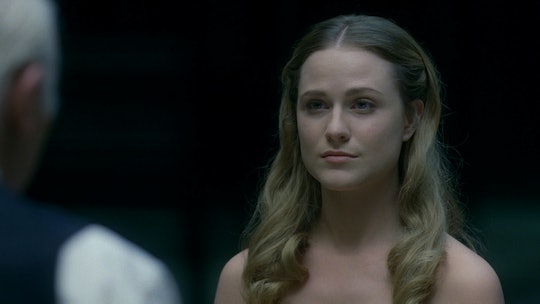 How Does Dolores Know Arnold On 'Westworld'? They Seem To Share A Special Bond

There are a lot of characters involved in the world of Westworld, but one could argue that Dolores is the main star of the show. The series began with her and since then, fans have continued to follow Dolores' journey as she pulls herself further and further away from her usual narrative. According to the head of security, Dolores is the oldest host in the park, having undergone various repairs to stay in tip-top shape — or, at least, that's the claim. But it seems as though Dolores has veered off course, speaking to someone no one else can see. Someone that could be Ford's dead partner, Arnold. But how does Dolores know Arnold on Westworld? Well, if Dolores is as old as they say she is, then it stems to reason that she knew Arnold back when he was alive.

In a cautionary tale to Bernard, Ford opened up about his former partner, Arnold, who attempted to give the hosts consciousness by putting their own voices inside their heads. The plan failed, though, causing the hosts to think they were hearing the voice of God, which eventually drove them insane. Arnold then killed himself in the park. At least, that's what Ford claims. Now there's been a few hosts that have begun to malfunction, speaking to people that aren't in the room, sometimes even calling Arnold by name. A similar instance occured when Ford most recently questioned Dolores.

Based on Ford's questions, it seems it was Arnold who created Dolores and Ford believes that Arnold, or at least a part of him, is still potentially existing inside of Dolores. And while she claims she hasn't spoken to Arnold for 34 years (aka, the day of his death), she's definitely hiding something from Ford, and odds are it's in regards to his partner. According to Ford, Dolores was supposed to help Arnold destroy the park, but she didn't. Instead, she continued contently living in her loop, but that doesn't seem to be all that true. Because right after Ford left the room, Dolores began speaking to an invisible being. "He doesn't know," she said to thin air. "I didn't tell him anything."

It's possible Dolores is speaking to Arnold and Ford was right to suspect that she can still hear his voice. But if that's true, what exactly is it that she's hiding? Fans know she's having secret meetings with Bernard and he did tell her not to tell anyone about their conversations. Does this mean Bernard and Arnold are connected and using Dolores somehow? It's a bit too soon to tell.

Now that we're halfway through the first season of Westworld, answers should be coming relatively soon. Maybe one answer will appear in the form of Arnold himself, proving that maybe he's not so dead after all.