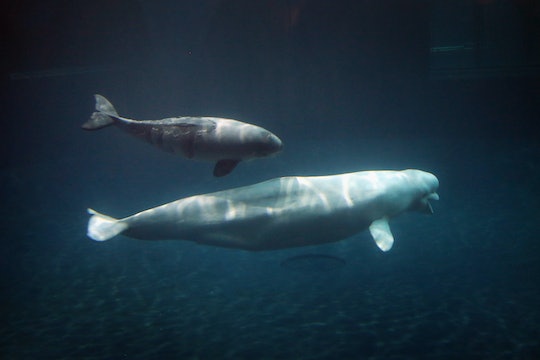 How Does Echolocation Actually Work? It Plays A Prominent Role In 'Finding Dory'

There's more to just love and friendship when it comes to Disney Pixar's Finding Dory. There are also some very cool underwater lessons to be learned, like how echolocation actually works. Along her quest, Dory befriends Bailey, a Beluga whale in captivity at the Marine Life Institute who is Larry David-levels neurotic and convinced that his echolocation does not work properly. Voiced by Modern Family's Ty Burell, Bailey and his unique skill-set will likely have your kids asking questions — and they'll definitely want to ask you what the heck he was talking about. (Don't go unprepared; You never know what they'll pick up on.)

Although Bailey claims initially that he doesn't know how to tap into this cool biological feature, it appears he's simply never tried to use his sonar skills before, since he's been in captivity. A whale has to emit sound into the water and the sounds reflect off of objects (don't get me started on physics) and return to the whale, where the sound wave seeps into its jaw. The whales then use those echoes to judge where things are. Nature is pretty badass, right?

Scientists actually disagree about where the sound comes from within the whale. Some say it comes from a nasal plug and that the shape of the "melon" or forehead adjusts to create sound. Others think that the larynx emits the sounds. It's actually a crazy little mystery.

And when you get down to it — if scientists don't know where the sound comes from, how the heck was Bailey supposed to figure it out alone? But, no spoilers I swear, it seems like one of those things that once you get the hang of it, it's easy, though the actual sounds that they emit are not perceptible to human ears, like Bailey's was in Finding Dory. But echolocation is super accurate and sensitive when it comes to getting around the sea.

According to the National Marine Mammal Laboratory, it's so sensitive that whales in captivity can distinguish between "objects that are the size of a B-B pellet and a kernel of corn" at about 50 feet away. I don't think I could do that from 4 feet away without my glasses on.

Bailey's echolocation doesn't sound so meticulous in Finding Dory. Ty Burrell says that he would practice the "sonar noise" from the script in his car. "It was warm, and people had their windows rolled down,” he said. “I noticed that as I was pulling up, they would look around. I think they thought there was a clinically-depressed ambulance behind them."

In fact, the sound is either endearing or very annoying. If your kids aren't scared of sea animals and loud noises, you might want to prepare yourself for your own brood to take on Bailey's echolocation skills. Buy earplugs.