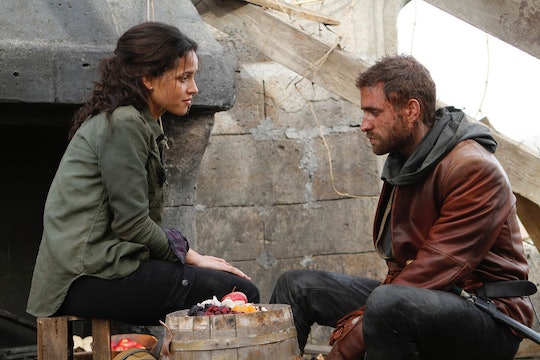 How 'Emerald City' Compares To 'The Wizard Of Oz'

With the new year comes new shows and NBC is throwing their hat into the ring with the new magic-filled show, Emerald City. With the tag line, "A new Oz rises," one has to wonder how does Emerald City compare to The Wizard of Oz? While there's definitely a lot of similarities between the two, this new spin on the classic tale is a bit more grown-up than the original version.

Emerald City and The Wizard of Oz both begin the same way. Dorothy, along with her dog, are transported from her home in Kansas to the magical world of Oz. This is about where the similarities come to an end though. Unlike in the popular film, Dorothy Gale is a young woman, not a young girl. Additionally, in The Wizard of Oz, Dorothy accidentally kills the Wicked Witch of the East when her house falls on her. Similarly, Dorthy "kills" East when she arrives in Oz in a police car. However, based on the trailer, it looks like East is able to survive and is a key player in the show.

While Glinda the Good Witch was there to help Dorthy in The Wizard of Oz, this doesn't seem to be the case in Emerald City. Dorothy is warned that East has two sisters, one in the West and one in the North, and they'll both want revenge. She's then advised to follow the yellow brick road to Emerald City to find the Wizard, possibly the only person that can help her out of this rather sticky situation.

The trailer also reveals that magic is currently nonexistent in Oz, however, as the trailer goes on, this proves to not be entirely true. It seems the Wizard has outlawed magic, sparking a war between those that work with science and those who wield magic. As far as I can remember, there was no such war in The Wizard of Oz.

Along the way to the Emerald City, Dorothy then proceeds to make friends the same way that her film counterpart does, but it comes with an interesting twist. You see, grown-up Dorothy becomes more than just friends with the Scarecrow she meets. It's clear from the trailer that sparks will fly between the two characters, because what is a TV show without a little bit of romance?

The biggest difference between the classic Dorothy and this new Dorothy seems to be that Adult Dorthy has some kind of power, presumably the same magic the Wizard has outlawed. There's definitely a Chosen One vibe surrounding this Dorothy and I wouldn't be surprised if there will eventually be a big reveal about how she is actually the savior of Oz and is meant to right all the wrongs there at some point.

Despite the predicability of this show, I will say that I'm officially intrigued. The differences between Emerald City and The Wizard of Oz are enough to make it stand out on it's own and it'll be interesting to see how the show plays out as the season progresses.

You can watch the series premiere of Emerald City on Friday, Jan. 6 at 9 p.m. ET on NBC.