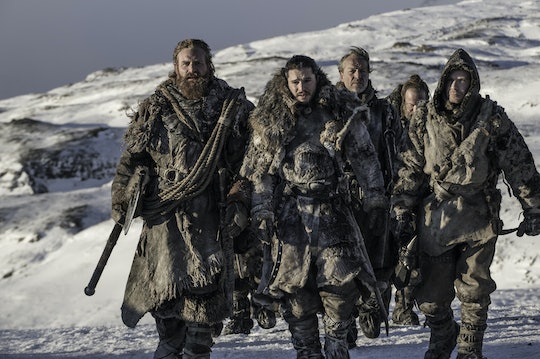 Predicting How 'Game Of Thrones' Season 7 Will End

Game of Thrones is coming to an end at a truly rapid clip, due both to the fact that there are only a few episodes left in the series, and that the narrative pacing in Season 7 has been faster than ever. So how does Game of Thrones Season 7 end? I do not watch leaked episodes and I hate spoilers so I cannot tell you anything definitive, but I can tell you that it will be mind-boggling. I know this to be a fact because Game of Thrones finales are always mind-boggling — remember Cersei blowing up all of King's Landing?

In an interview with the Hollywood Foreign Press Association, Kit Harington, who plays Jon Snow, has said that the last episode will be "incredible" and really "set the template" for the eighth and final season. I know he can't give anything away, but that's still not much of a hot take. It has been revealed that the final episode will clock in at an impressive 81 minutes long, which is about the length of a movie (a really, really short movie, mind you). Considering how much plot the showrunners have managed to squeeze into just 50 minutes, any number of things could happen in that amount of time, probably including lots of death and destruction. So based on the way things are going, here are my theories for how the season will end.

Because this guy just has to go. I predict that Arya and Sansa will finally figure out what he has been up to and Arya will take matters into her own hands. Yes, this is slightly wishful thinking but hey, I need this.

A Dragon Will Die

It pains me to say it, but I feel like this season has been foreshadowing a dragon death for a while. Qyburn has created a weapon to kill them. Bronn injured one. And everyone believes that they are more or less invincible, which is the kiss of death narratively speaking.

Jon Snow & Daenerys Will... You Know

When will these two kids just get together already? But actually, I get the feeling that something is going to happen between them just as they discover the truth of Jon's parentage, and that he's actually a Targaryen. Nothing like a little star-crossed incestuous romance.

Cersei revealed to Jaime that she's pregnant in Episode 5, either in a last-ditch Hail Mary effort to keep him on her side, or because she is actually pregnant. (I'm hoping for the latter since the former troupe is far too played out.) But if you remember, it was prophesied that Cersei would have just three children, all of whom would die. So far, this prediction has been eerily accurate. For this reason, I have a feeling that if Cersei's pregnancy is real, it's going to end in more tragedy.

Basically, I am a trembling bundle of nerves waiting to find out what's going to happen next in Westeros. Just please don't kill off anyone I like anymore.