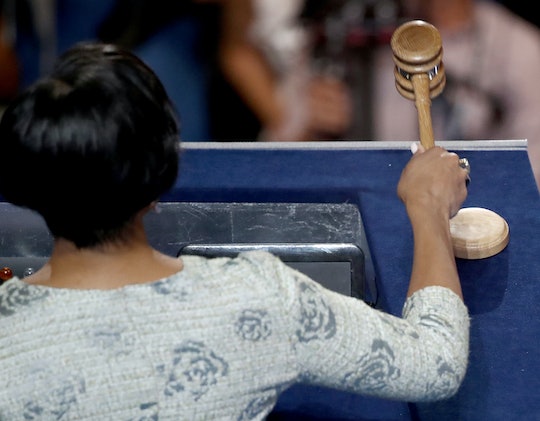 How Does Impeachment Work? You're Not The Only One Wondering Right Now

With the extremely scary results of the 2016 election coming to a close, you might find yourself wondering, how does impeachment work? All jokes aside, the Republican party nominee is facing some very serious allegations. And, similarly, many have wondered, including CNN, if it would be possible to impeach Hillary Clinton if she becomes president as well. Regardless of what you hope may happen, the process of impeachment is no easy matter.

Andrew Johnson and Bill Clinton are the only two presidents to have been successfully impeached by the House of Representatives, and according to The New York Times, both presidents were later acquitted by the Senate. And only two more have ever been considered for impeachment, John Tyler, and Richard Nixon. But what does that even mean?

And what are grounds to impeach? According to the US Constitution, "Treason, Bribery, or other High Crimes and Misdemeanors" justify impeachment.the Constitutional Rights Foundation adds that if the majority of the House moves to impeach, the official in question must stand trial in the Senate.

A common misconception of impeachment is that it means his or her removal from office, when it actually functions as an indictment of a public official. Impeachment does not necessarily result in removal from office; it is only a legal statement of charges. In order for an impeachment to successfully remove an official from their office, the Senate must successfully condemn the official via trial. According to the Constitutional Rights Foundation, an impeachment is political in nature, not necessarily criminal. Impeachment is a two step process decided by both the House and the Senate, with many lengthy sessions and votes. So while you may be hoping for an impeachment of the president-elect, if history's lack of impeachment of its presidents has anything to say about it, it would seem it's an unlikely path. However, with this election breaking plenty of precedents, a possible impeachment may not be as far off as you think.