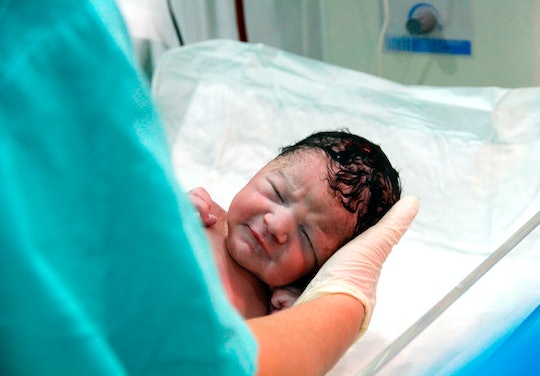 Here's How An Induced Birth Affects Your Baby

As I neared the end of my pregnancy, I started to fantasize (obsess, really) about the day I'd finally go into labor. Would my water break in the middle of the night? Would there be a mad dash to the hospital? Or would I be one of those women upon whom a mystical serenity descends, and spend my early labor calmly baking cookies for the nurses? The truth is, not all births begin naturally. Sometimes women need (or elect) to be medically induced. So how does an induced birth affect baby later?

In 2003, The New York Times reported that one in five babies are medically induced, and that in half of these instances, induction was elective — meaning, not necessary to protect the life of the baby or the mother. The article cited serious doctor and expert concerns about the growing practice of elective induction.

Of course, some inductions are unavoidable. According to Mayo Clinic, your doctor might recommend induction if the benefits outweigh the risks — for example, if you develop a serious condition like pre-eclampsia, placental abruption, infection, or oligohydramnios (low amniotic fluid).

But in 2015, The New York Times published an article that suggested full-term inductions might reduce stillbirths, and that medical induction might be safer for moms and babies, assuming they've reached full-term. According to Dr. Vincenzo Berghella, the lead author of the study, new "preliminary data" indicated that induction may not increase the likelihood of C-sections, as previously thought.

The key words here, however, are preliminary data. Science is like a living thing — always evolving — so groups like the American Congress of Obstetricians and Gynecologists (ACOG) look for consensus when making their recommendations. ACOG still cites major risks for medical induction, as do the experts Romper reached out to for comment.

According to Dr. Michael Nageotte, a nationally-recognized perinatologist and Associate Chief Medical Officer of Miller Children’s & Women’s Hospital, Long Beach, medical inductions require drugs like Cervidil or Pitocin to jump-start a woman's labor, and these drugs aren't without risks. Nageotte writes to Romper that Cervidil in particular is associated with "increased frequency and intensity of contractions," which could increase the likelihood of a C-section.

But Nageotte also notes that, generally speaking, babies induced at term aren't at any greater risk than spontaneously born "matched infants" — newborns of the same size, weight, and gestational age. So if medical induction is necessary, rest assured that your baby will likely be just fine.

However, he doesn't recommend elective induction before 40 weeks, and writes that he "encourages all patients to wait for spontaneous labor, at least through 41 completed weeks."

Dr. Mary O’Toole, an OB-GYN at Saddleback Memorial Medical Center in Laguna Hills, California, explains in an email that it's important to assess "the readiness or 'ripeness' of the cervix before embarking on induction." According to O'Toole, a failed induction may extend labor time, and possibly expose mother and baby to infection.

Dr. Stephanie Wyckoff, an OB-GYN at Orange Coast Memorial Medical Center, in Fountain Valley, California, cites further risks, telling Romper that failed inductions may result in C-sections due to fetal distress, which is often a sign of oxygen deprivation.

"Most of the time the baby recovers well after delivery, but in extreme cases, this could lead to neonatal brain damage and its associated problems," she writes. Wyckoff adds that such danger is present during regular labor as well, but believes the risk is exacerbated by induction.

It may well be that the critical consensus on elective induction will change one day — remember how science is like a living thing? Until then, the experts consulted by Romper, and organizations like The March of Dimes strongly recommend waiting for spontaneous labor whenever possible. When in doubt about your specific situation, always consult your doctor.