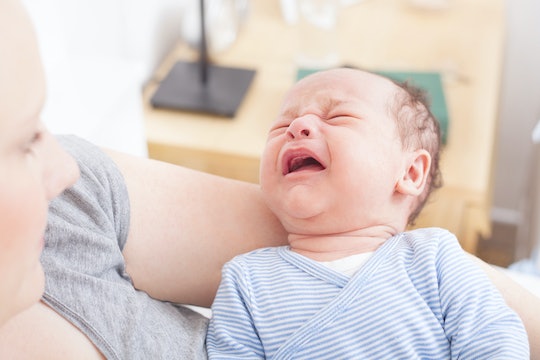 This Is How Mercury In Retrograde Influences Your Baby, According To Astrology

I'll be the first to admit that I'm not one much for astrology, despite the There scores of iPhone apps and Twitter feeds dedicated to it. I even knew my sign almost as early as I knew my own birthday. So when Mercury goes into retrograde, it's easy to see how it's all over your Facebook timeline. Moms especially are curious as to how this influences their children. So how does Mercury in retrograde affect babies?

As a person of faith, I cannot possibly contend that astrology is impossible, because that is tantamount to arguing over whose invisible friend is better. Faith and belief is just that — faith and belief. Beyond that, astrology, and, more specifically, reading the stars, is a practice that dates back to the Babylonian era.

Eventually, astrologers, or Chaldeans as they were known in the Hellenistic Era, according to the Journal of Eastern Studies, would influence some of the greatest philosophers in history, namely Herodotus, who would eventually go on to be known as "The Father of History."

These Chaldeans and early astrologers believed that Mercury, or Toth as they called it, could stir storms and awash men in deep thought and contemplation — sometimes dangerously contemplative, noted Traces on the Rhodian Shore. This observation of mental awareness in the ancient Greeks eventually evolved into the modern astrologist's readings of the planets (using many of the same means of measurement) and the belief that when Mercury appears to reverse its course, which it does 19 percent of the time, it has an altering effect on human behavior, even tiny humans.

Where does that leave mothers? Not only are the mothers at the mercy of Mercury, so are their kids, making it doubly problematic. So how does Mercury in retrograde affect babies? According to AstrologyZone, astrologists believe that the effects of Mercury in retrograde are fairly uniform across the span of life. The website noted that the way astrologers believe Mercury affects behavior is through communication — writing, listening, speaking, tech, and more.

How would this affect babies? For one, babies are already crap at communicating what it is that they need in life, so, in theory, this could just become more complicated, leading to perhaps a few more sleepless nights and a bit more rocking your baby on your shoulder.

Also, a disruption in communication goes both ways. Maybe you try to project a feeling of calm or rest, and they read it as party time. You might think you're offering solace in the form of your boob, but they might think you're trying to sneak them into a nap. (You totally are also doing that, admit it.)

Astrologers caution that while Mercury is in retrograde, routine is best. This isn't the time to rock the boat, so, according to them, you might want to wait it out before sleep training, trying out a new nipple, or taking their pacifier away, lest you want more headaches than previously anticipated.

Whether or not you ascribe to the beliefs of astrology, you can certainly see how interesting the entire process is, and just how complex. Also, if your kid pees on the floor, you can always just blame it on Mercury. (Because it's surely not Uranus' fault.)