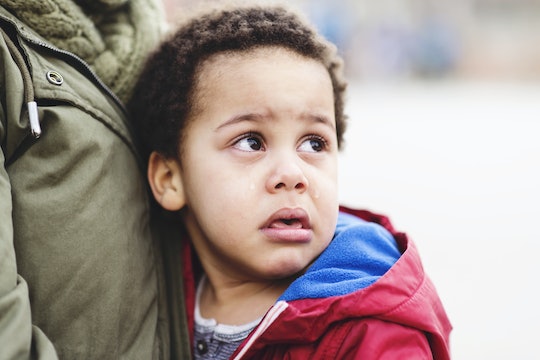 How Astrologers Say Mercury In Retrograde Will Influence Your Toddler

Parenting a toddler is tough work. One minute you're the place your child goes for comfort, the next you're the sheriff at the O.K. Corral. Some believe that the worst of it is the fault of the heavens. Specifically, Mercury. When Mercury is in retrograde, some say it's a bit like parenting under a full moon. So, how does Mercury in retrograde affect your toddler?

While many are skeptical about the influence of heavenly bodies on the mortal beings down below, the origins of modern astrology are as old as thought. The earliest accounts of Vedic Astrology date back all the way to 500 BC, and the threads of their influence can be witnessed throughout astrology all over the world. Western astrology begins somewhere before fifth century BC, when the father of history, Herodotus, began examining Babylonian and Chaldean schools of thought surrounding the effects of the stars and planets on mere mortals. With such a rich, storied history, it's at least something to consider when nothing else makes sense.

Personally, I know very little about astrology beyond the fact that I was born between Aries and Taurus. And the only thing I know about Mercury is that his first name was Freddy and he was the lead singer for Queen. Sure, I can tell you all about astrology's impact on the scientific revolution and Francis Bacon's astrolabe, but that's all history. The practical application of these readings remains aloof to me. So I called on a few modern day astrologers and women who think quite a bit more about the stars than I do.

If you think astrologers are all Miss Cleo and Psychic Friends, you're way off base. The two women I spoke with are bad as hell feminists who have taken a personal and scholarly interest in the ways in which things and people are affected by the cosmos. It's fascinating.

When it comes to astrology and the family, the questions are many. For today, though, I want to know, how does Mercury in retrograde affect your toddler?

The first astrologer I spoke with was Tisch Aitken and she tells Romper, "You will notice the Mercury retrograde energy heighten over the weekend when it joins up with Mars, the planet of war and stations direct on Sept. 5 at the degree of the solar eclipse. The next few days, people have to be conscious of overreacting, losing their temper, and accidents with the volatile Mars energy joining up with Mercury, planet of communication and transportation. Lies can be uncovered with Mercury retrograde — especially when it links up with Mars when it stations direct."

Intense, right? Toddlers are already complete crap at communication unless you're in a Toys R Us or Target, and then suddenly, they remember all their words.

The next expert I spoke with is not only a modern-day astrologer, but really an expert on many of the witchier, goddess-derived religions of the world. She's also a mother who has first-hand knowledge of what this means. Diane Horton of New Mexico tells Romper that the period of Mercury in retrograde (MR) affects everything to do with communication, from people to devices, to the world at large. She offers this practical advice: "For infants and toddlers, I would take an MR to check all the communications around your children — double check doctor's appointments, play group schedules, preschool events, and more. If you have baby monitors or cameras, make sure they have the right batteries, fresh batteries, and are functioning correctly. The other thing I would do for toddlers is make sure all your outlets are properly covered so that a toddler cannot get to them and potentially hurt themselves badly. If nursing mothers are using an electric milk pump, that could go on the fritz during a Mercury Retrograde, too."

(I honestly never would've thought it could affect my breast pump, but feeding and nursing is a form of communication, so it makes sense.)

Horton tells Romper that you might notice a change in the normal pattern of behavior in your toddler. "Children might experience times of confusion that they cannot express — frustrations at an above-normal level. This may cause extra crying and needs for comfort. I never advise children's crying, particularly babies' crying, to be any kind of 'manipulation' of the parent." She adds that this period can being emotionally draining for toddler and parent, and that both will need extra time to recharge. Toddlers may require extra attention and cuddles, and so may you.

She also notes that MR is a period of reflection, so your toddler may be quieter than normal, and that's OK, too. (Where can I sign up for that? Does MR do this to 6-year-olds? Or can I buy a Mercury mute button?)

It seems like it can be a sketchy, difficult time, or perhaps just a period where you might find yourself double checking appointments more frequently and taking quiet time more often. Hopefully, you can wade through it and make it out to the other side — and maybe hold off on the potty training.