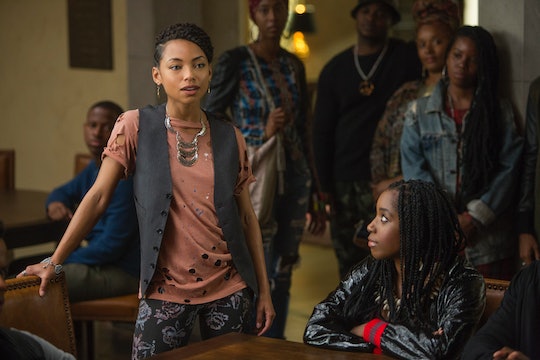 Netflix's 'Dear White People' Will Overlap With The Film

Justin Simien released his first feature film Dear White People back in 2014. Since then, it has only continued to grow in popularity, and is now becoming a Netflix TV series, which Simien wrote and directed a few episodes of. The TV series will be a continuation of the film, which has some fans wondering: how does Netflix's Dear White People connect to the movie?

Just as with the film, the show will take place at the fictional Winchester University, a predominantly white Ivy League school, where racial tensions are running high. The show will follow the same characters from the movie, with some actors from the film also reprising their roles. The protagonist is still Samantha White, who hosts the radio show "Dear White People." The show will pick up her story where it left off, with her now secretly hooking up with a white guy named Gabe.

The show will also continue the story of the other main characters in the film. Coco is now friendly with Sam, a stark contrast from their relationship in the film; Lionel has moved on from being "only technically black" to now struggling with his sexuality; and Troy is still trying to live under his father's expectations and run for student body president. Did I mention that his father is the dean?

There does seem to be a bit of overlap with the show and film, since the race for student body president was also a plot point in the movie. However, in the film, Sam also ran for president, but it's unclear if that will be the case in the show as well. The Netflix iteration will also bring in some new characters, including Sam's friend Joelle Brooks, played by Ashley Blaine Featherson. Featherson was in the original film, though her character didn't have a name and was referred to as Curls, according to IMDB.

Though the show was done filming before President Donald Trump was elected, the new political climate is much different than the one in which the film came out in. While the film heavily dealt with this idea of "post-racial America" with President Barack Obama as president, the show will look at the landscape of social injustice, protesting, and political correctness. The series will also give fans a more in depth look at each character — something that couldn't be done to the same extent in the film.