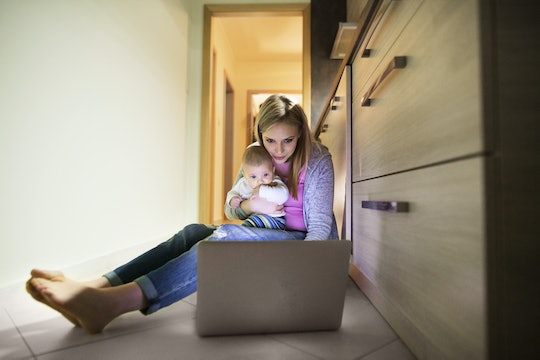 Paid Leave Has The Potential To Help Families So Much, But Is Also Constantly At Risk

Monday marks 25 years since Congress passed the Family and Medical Leave Act, a landmark piece of legislation that made the workplace more equitable for working families. The FMLA made it easier for parents — especially mothers — balance their personal and professional responsibilities without risking their careers or spiraling into poverty. But the 25-year-old law falls short in a lot of ways in supporting working parents, which is why advocates continue to push for a national paid leave policy. And how does paid leave help families in a way FMLA does not? Access to paid family leave could mean the difference between stability and poverty.

Although the Family and Medical Leave Act does provide working parents in the United States with some access to leave, it still pins working families between a rock and a hard place. On the one hand, the FMLA is crucial legislation: Under the 1993 federal law, employees receive up to 12 weeks of leave to care for a new child, help a sick loved one, or recover from a serious illness. But those are 12 unpaid weeks; that means parents who need time off but cannot afford to go without pay must choose between taking care of a sick newborn or losing their only means of income.

A parent who takes leave without pay can easily slip into poverty by risking their financial stability. That, in turns, can creates stress, straining their and their family's mental and physical health.

Workers also have to meet strict requirements in order to benefit from the FMLA in the first place. The 1993 legislation applies to businesses with 50 or more employees, which leaves out at least 40 percent of the workforce, according to the National Partnership for Women & Families, which helped draft and lead the fight for the FMLA. Contrary to that, the U.S. Bureau of Labor Statistics’ National Compensation Survey estimates that, as of 2017, only 15 percent of American workers have access to paid leave through the companies they work for.

Why is that the case? Well, among 41 developed countries, the United States is the only nation without paid family leave, according to the Pew Research Center. But that's not the case globally; most developed nations offer public and private sector employees comprehensive benefits.

Sweden, for example, offers new parents 480 days of paid leave at 80 percent of their normal salary. And New Zealand provides mothers up to two months — the smallest amount of paid leave available among nearly four dozen countries. (The spouse of the employee who's given birth can receive up to two weeks unpaid leave under New Zealand's paid leave law.)

Debra Ness, president of the National Partnership for Women & Families, said in a statement on the anniversary of the FMLA,

As a nation, we have reached an extraordinary moment of consensus and conviction in the national effort to win paid family and medical leave for all. ... But the details matter tremendously and key policy principles are essential to ensuring that the national plan we adopt will be affordable, sustainable, inclusive and effective.

Without a paid leave policy, many working parents must also make choices they may not want to, such as going back to work sooner than intended. And research does show that how soon you return from paid leave can affect your baby's health: A 2011 Pediatrics study, for example, found that working parents who can or choose to breastfeed are more likely to nurse for longer if they can stay on leave for an extended period.

What's more: A working paper published by the National Bureau of Economic Research (NBER) last year concluded that policies offering up to 12 months of paid leave can improve a child's health, as well as advanced a woman's career. Women are more likely to return to work if they have access to up to a year of leave, and they wouldn't see a negative impact in long-term employment or earnings, according to the report.

A large body of research has shown that paid family leave not only benefits families, but also the business that employ them.

Although providing paid leave comes at a small cost, most companies report seeing greater worker retention and higher productivity, according to Fast Company. A series of reports also found that paid leave policies didn't hurt a company's bottom line; an overwhelming majority of employers in California— the first state to implement paid family leave — and New Jersey have reported a positive to no adverse effect on their businesses.

So what's the solution? In 2013, Democratic Sen. Kirsten Gillibrand of New York filed the Family and Medical Insurance Leave (FAMILY) Act, which would offer up to 12 weeks of paid leave for childbirth, caregiving, or medical issues. But each time Gillibrand has introduced the FAMILY Act — 2013, 2015, and last year — it’s stalled in Congress.

We need a law that covers everyone, is affordable, accessible and for an adequate amount of time. Without paid leave from a sustainable source, we have people who get chemo or radiation on their lunch hour and then return to the workplace, parents who have to leave a preemie in the NICU in order to keep their jobs and their insurance. We have people who face financial disaster because they were being a good parent to their child or a good child to their parent.

There's definitive proof that paid family leave works for everyone. Yet, most conservative lawmakers continue to rally against enacting federal legislation. Many anti-leave folk believe offering paid time off would hurt businesses and workers. But the facts disprove those claims, and it's about time the United States moves forward in supporting working families fully.