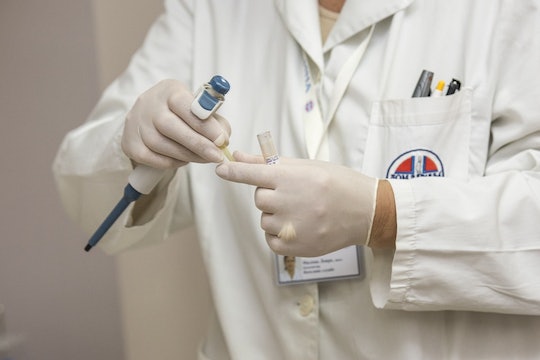 How Does Pitocin Affect A Baby Later In Life?

Going past your due date is a good indicator that your womb is so warm and cozy, that your baby just doesn't want to leave. I mean, who can blame your little one for wanting to stay put? But the time comes when baby must come into the world, which could involve medical intervention. Pregnant women are often given synthetic hormones to help kickstart labor, and although this may help to move things along, moms can't help but wonder how does Pitocin affect their baby later in life? Because if the outcome is too risky, it might be better to let nature run it's course instead of trying to induce.

According to Healthline, pitocin is the synthetic version of oxytocin, a hormone that helps to stimulate contractions when given to pregnant women. This drug, given by IV during labor, has been used for years to speed up the delivery process. But as labor nurse Jeanne Faulkner said in an article for Fit Pregnancy magazine, studies are finding there may be more downsides to administering Pitocin than medical professionals once believed. This new information has the labor and delivery community second-guessing the trustworthiness of this standard drug as more is discovered about the connections between the use of Pitocin and adverse reactions in infants.

Research presented at the Annual Clinical Meeting of The American College of Obstetricians and Gynecologists showed that infants who's mother received Pitocin during childbirth had more unexpected admission to the NICU as well as low Apgar scores. And it's that low score that could be the connection between Pitocin and long term health effects.

Additionally, a study published in the journal BMC Pregnancy and Childbirth found that certain indicators of neurologic disability and cognitive function in early adulthood related to low Apgar scores. However, much more evidence is needed before a conclusive link can be made exclusive to other risk factors.

Although most of the side effects to Pitocin are prevalent in the short term period after delivery, there could be more long term effects that are not yet known. But as the evidence grows for using caution in the amount of Pitocin given during labor, it looks hopeful that more conclusions of how this affects babies later in life will be discovered.