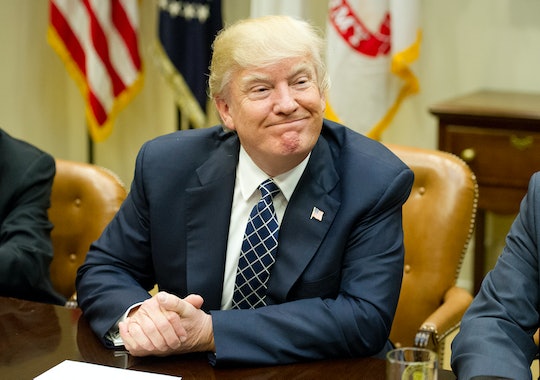 On Tuesday, President Donald Trump signed an executive order that effectively rolled back all of the Obama-era legislation protecting the environment. Part of the order, called “Energy Independence," directed the Environmental Protection Agency to rewrite the Clean Power Plan. Trump joked to the coal miners surrounding him as he signed the order that it would put the miners back to work. Employing Americans is always a good thing, but so is protecting the environment — especially because the health of the environment usually determines the health of the population as well. Air pollution, for instance, is terrible for kids' health as everyone knows, as well as anyone with a vulnerable immune system. And over a prolonged period of time, air pollution also slowly kills even the healthiest among us.

There has to be a way to create jobs and protect people's health at the same time. Pollution is bad for everyone, but given that kids spend more time outside and have weaker immune systems, they're often more susceptible to the effects of smog. To start, children's respiratory and immune systems aren't even fully developed when exposure begins, so there are different effects than in adults. Exposure to pollution leads to asthma, chronic coughs, and bronchitis. In some cases, pollution and lung development can lead to infant and child mortality.

In addition to respiratory issues, in places where air pollution is very bad, it's often mandated that children and vulnerable populations stay indoors all day long. That can affect children's mental health and can also cut back on essential playtime and exercise.

The Clean Power Plan was signed into law in 2015 by Obama and had the goal of requiring a 32 percent reduction in greenhouse gases from power plants by 2030. It also regulated coal-fired plants to be more efficiently and prioritized renewable energy sources over coal. Trump's executive order today essentially rolled back regulations that aim to keep the air as clean as possible in the name of ending "the war on coal."

But most experts in the energy sector agree that natural gas and wind are more profitable and employ more people. The CEO of Murray Energy, a coal mining business, told The Guardian over the weekend that Trump should probably lower his expectations about reviving coal. The industry will continue to cut jobs — most plants use machines, not people to work — with or without the Clean Power Plan. And that's the CEO of a coal mining giant.

So Trump, with the approval of Scott Pruitt, the head of the EPA, just rolled back regulations and a workable plan for the American energy industry to expand in ways that were environmentally friendly for no good reason. The air will be polluted, children might get sick, and coal miners are swindled into waiting for jobs that will likely never come.

The Clean Power Plan, like most legislation, was "flexible," according to the EPA's description of the plan. Hopefully the new administration and the coal industry will be able to channel that attitude and work together to protect children's respiratory health going forward. But don't hold your breath. (Or maybe do.)