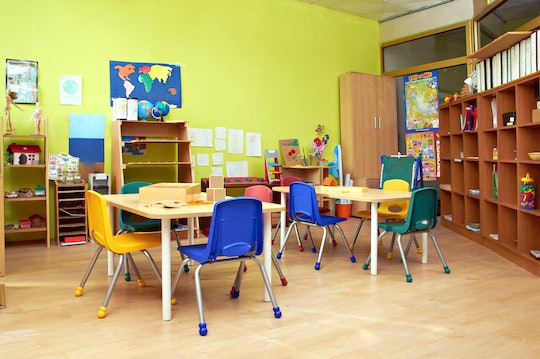 This Is How Public School Influences Your Kid Later In Life, According To Science

Choosing a school for your child seems to be a deeply personal and important choice, and one every parent worries about. I went to public school from kindergarten to fifth grade, and after that, I attended only small, deeply religious, parochial schools. My own kids go to public school in New York City, and it's been a struggle. I think a lot of parents are in the same boat, wondering how their child's education will affect them as they grow, but how does public school influence your kid later in life?

I spent a lot of my time at private school pretty bitter, to be honest. Therefore, I worried about my objectivity with this topic. How could I conceivably advocate for the possible benefits of a private education if I hated my own time inside the institution so fiercely? In a word: data.

There's a pretty big culture war happening in the United States right now. A deep divide exists in the world of public education, with most debates surrounding the benefits or disadvantages of charter schooling and voucher programs. The Secretary of Education, Betsy DeVos, is a huge proponent for both, and it may change the landscape of the American educational system for years to come.

Our public education system in the United States began back in 1647 when the Massachusetts Bay Colony decreed that for every 50 families, there should be an elementary school equipped to educate the children, according to Race Forward. This expanded over the years until 1820, when the first truly public school was opened in the United States.

So how does the traditional public school influence your kid later in life? It's complicated. The thing about the American educational system is that it's not funded per capita, with each school receiving the same amount per child. Instead, it's based on a taxation neighborhood model wherein each school is given a base amount of funding per school from the federal, state, and city budget, and the remainder of the funding comes from taxes specific to the area, according to The National Center for Education Statistics.

This leads to a growing disparity in the quality of education between wealthy and low income areas. Neighborhoods known for great schools tend to see skyrocketing property and income taxes, as well as a high cost of living. Houses are more expensive to buy, more expensive to maintain, and the tax burden can be enormous. According to a story by National Public Radio, the achievement gap produced by the inequality in education is growing, not shrinking, in spite of calls from both sides of congress to improve the quality of education for America's children.

According to a longitudinal study completed by Sean Reardon at Stanford University, the achievement gap between affluent districts and those in the lower income areas tends to follow the child throughout their educational careers, and is a large determinant in their socioeconomic status as an adult. Alternatively, according to an article in The Washington Post, students in high performing, affluent public school districts tend to continue achieving at higher levels throughout their lives.

Some wealthy public schools even routinely out perform their private counterparts. In Boston, for example, The Boston Review published an article showing how strong public interest, involvement, public leadership, and a base of support has led the public schools in their area to score higher on tests and perform better overall than the private sector schooling.

Is there anything that can be done to close such a cavernous divide as the dissimilitude between schools of different socioeconomic statuses? That's the real question, and no one seems to agree on how to do it. However, one factor studied for over 37 years has been shown to decrease the achievement gap, and provide students a foundation for learning later in life — school-based early education.

According to a study published by Science magazine, districts with public preschools experience lower levels of secondary school dropout, higher literacy rates, and better math scores than those areas that do not have public pre-K. Recently, Mayor Bill de Blasio of New York City mandated that all preschool-aged children in New York City must be afforded a quality, full-day pre-K program close to their home, reported The New York Times.

While it's early days, and it's nowhere near deep enough in the program for any results to be published, advocates like Stacey Bennet of District 21 in Brooklyn tells Romper that the response has been overwhelming. Some schools have orientation and sign-up days that have to be extended two and three times to accommodate all of the parents anxious to get their child in a program. She also says that at least anecdotally, teachers of kindergarten are reporting that students last year (the first year after the full day pre-K program began) came in more prepared to learn, and more classroom ready.

In the long run, unfortunately, it's less about the manner of school, public versus private, than it is about basic socioeconomic status of the district to which your child belongs. The answers to this problem have yet to be made clear, and with the current state of education disruption happening, I don't foresee it changing any time soon. Thankfully, parental engagement has been shown to have a very deep effect on student outcomes no matter the district, noted the Harvard Family Research Project, and it's at least some comfort in the worry of this monster.