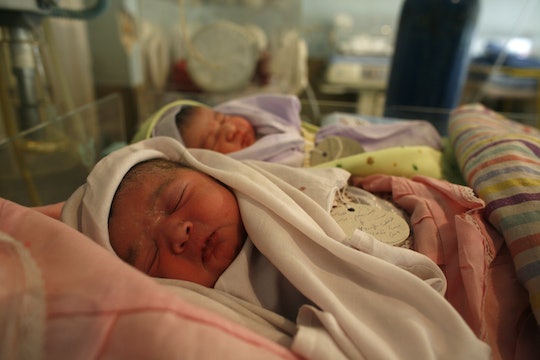 According to a recent report from the Centers for Disease Control and Prevention, infant mortality rates are lower than ever before in the United States. But there's one major catch: Race dramatically affects infant mortality rates to a point where black and Hispanic infants are twice as likely to die than their white peers. That's a huge exception and cause for alarm.

The report showed hat, overall, infant mortality rates are down 15 percent from 2005 to 2014, which means that there are only 5.82 infant deaths per 1,000 live births, compared to the previous 6.86 infant deaths. Sudden Infant Death Syndrome, or SIDS, is down 29 percent overall.

The rates are the worst for non-Hispanic black infants, who are 50 percent more likely to die than infants from other racial groups. The rates also varied among the Hispanic subgroups, with the highest infant mortality rate among Puerto Ricans. The lowest mortality rate among the Hispanic subgroups is among Cuban infants, which has a rate of three infant deaths per 1,000 live births.

One of the most common causes of infant mortality is preterm birth, or when a baby is born before 37 complete weeks. Non-Hispanic black women are 1.4 times more likely to give birth to a preterm baby, which means that something is off when it comes to prenatal care.

There's no screening to find out if you're likely to have a preterm infant, but there are things the CDC recommends pregnant women do to ensure carrying an infant the full term. One recommentation is to take prenatal vitamins and see a health professional regularly. Sounds easy, right? It is — if you're lucky enough to have access to affordable healthcare. If non-Hispanic black and Hispanic women can't go to a doctor as often as other demographic groups, the the infant mortality rates will likely continue to rise. That there is an overall decrease in infant deaths is a sign that education and awareness programs work. They just aren't being implemented evenly.

Report author T.J. Mathews told CNN of the new data, "I think there was a public health push in the past decade to figure out ways to lower this rate, and it has made an impact. We know that there have been a lot of efforts across the country in cities and states where they're trying to figure out ways where they can lower the infant mortality rate."

When it comes to infant mortality and race, though, many public health officials think that a socioeconomic explanation doesn't totally tell the full story – especially since the non-Hispanic black infant is also more likely to die than a Hispanic one, too. At the higher end of the socioeconomic ladder, researchers have found that there's also a disparity between black women and all other races. There's a working theory that African-American women simply experience higher levels of stress than any other group of women and that those stress hormones lead to issues with their pregnancies.

Hopefully, health officials and researchers can work together to put the puzzle together. Because the race gap when it comes to infant mortality shouldn't be so wide — it shouldn't be there at all.