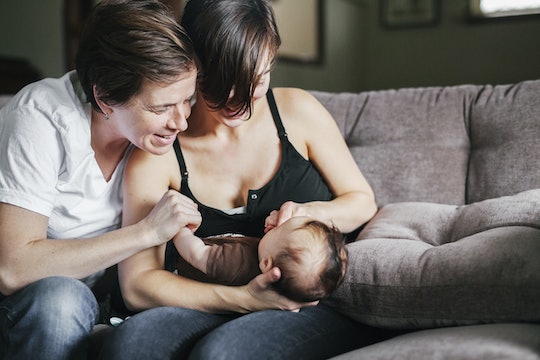 How The 4th Trimester Affect Your Marriage

Until I had my first child, I'd never heard of or understood the fourth trimester. After experiencing the first three months with a newborn, however, it became undeniably obvious to me that those months were vital and, in many ways, equivalent to another trimester. That's because, as with any trimester, there are major areas of a new mom's life that begin to shift during that time. Other responsibilities that may have previously been priorities, like work or love, can fall by the wayside, and wondering how does the fourth trimester affect your marriage is a good thing to consider.

The fourth trimester, which is defined by Thriving Home as "the three months after baby is born when the mother is healing, the baby is adjusting to life outside the uterus and the family unit changes shape." Thinking of the first months as another trimester may seem odd at first, but Baby Center noted that it's important to consider how much a newborn needs to develop over the first three months. Developing senses, controlling reflexes, getting used to a new environment, feeling safe, and bonding with parents are crucial during the newborn stage. Because of this, baby and mother are often one biological unit, according to the aforementioned Thriving Home article. Your baby quite literally cannot do anything without you and, if you're breastfeeding, your bodies rely on each other during this time.

Realizing that and adjusting to it can be exhausting. It often means that the large majority of your efforts, emotions, and energy are put into your newborn during the fourth trimester. This creates a new dynamic in a marriage that can be difficult to understand at first, especially when couples don't consider how different life will be with a newborn. Being through the fourth trimester twice now, I can tell you a new mom's focus shifts and there's very little energy left after healing physically, caring for a newborn, and potentially breastfeeding. On top of that, the exhaustion that comes with having a newborn in those first three months can take a major toll on general attitude and what would've been effortless interactions between a couple before.

For some partners, this time with a newborn can create a major strain on marriages, according to Parents. Many couples are blindsided by the fourth trimester and don't realize its struggles are completely normal. Additionally, it can be difficult for dads to see or understand what new moms are going through. This can create resentment, communication issues, and in general, total confusion in a marriage.

To help alleviate some of the effects the fourth trimester takes on your marriage, the aforementioned Parents article suggested discussing and potentially reevaluating areas like household chores, sex, parenting styles, and time spent as a couple. Although all of these areas continue to be vital pieces of your partnership, they're going to shift in the fourth trimester. It's important to acknowledge that.

Working together to accept new definitions and finding ways to better function within change is what I've found to be the key to surviving during the fourth trimester (and with kids in general). Additionally, if you feel that you're continuing to struggle or you're just not able to see eye to eye with your partner over new issues, reach out to an expert or therapist. Just as an OB-GYN is vital to helping you through pregnancy and birth, a couples therapist can help you maneuver this major life change within your marriage.

More Like This
When Does A Baby Recognize Their Father? A Pediatrician Explains
What To Do If Your Toddler Keeps Taking Off Their Diaper At Night
Sex & The Single Mom: Grieving Divorce
What To Write In A Valentine’s Day Card
What Parents Are Talking About — Delivered Straight To Your Inbox