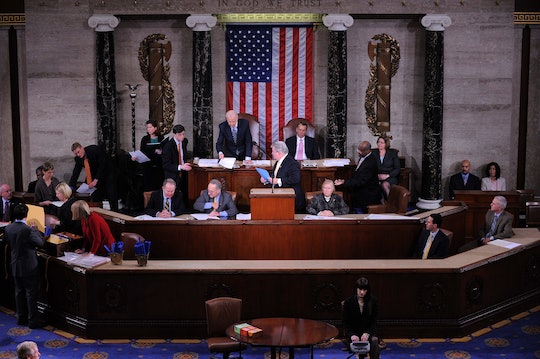 How Does The Electoral College Work? It's Okay If You're Confused

With Election Day coming up, it's always a good idea to figure out just how much you know about the election process. Growing up, I always believed that everyone just cast their ballot for president, those ballots were counted up, and the next president was whoever had more tallies in his or her favor. But the reality of an election isn't quite so simple, and when people vote for one candidate or another, they're actually voting for a representative to send to the Electoral College, where the real action takes place. So how exactly does the Electoral College work?

The Electoral College, despite its university-sounding name, isn't actually a place. It's a group of 538 people who represent their respective states' votes for president, and each state has a different number of electors that represent them, depending on the number of senators and representatives they have in Congress. In case you're wondering, each state has two senators, and the number of representatives per state depends on its population. (This is why candidates tend to hone in on states like Texas and California, which are some of the real MVPs when it comes to number of electors.)

Each party names its electors — who are usually politicians or affiliated with the political party in some way — and each state has more electors than it does invitations to the Electoral College. That's where voters come into play.

When Election Day comes around (or, you know, early polling), voters are actually casting their vote for an elector — not the president. So if you live in New York and vote for Democratic candidate Hillary Clinton, you are actually casting your vote to send a Democratic elector to the Electoral College. 48 states operate on winner-takes-all rules for their electoral votes, as well, so if 50.1 percent of Californians vote for Republican nominee Donald Trump, for example, all 55 Californian electors would be Republican electors, who would most likely vote for Trump. (Maine and Nebraska go a bit rogue, though, and use a more proportional system that selects electors based on results across the state and districts won.)

In short, the popular vote doesn't always reflect who will be president (as the world realized in 2000, when Democrat Al Gore won the popular vote by several hundred thousand votes, but eventually lost to Republican George W. Bush by five electoral votes, according to NPR). Actually, NPR writer Danielle Kurtzleben did the math and found that if a candidate wins the right states, they could snag the presidency with as little as 23 to 27 percent of the popular vote.

However, there's no need to worry too much — there have only been four cases throughout history in which a president has won the Electoral College vote without winning the popular vote, after all. So regardless of your thoughts on electoral reform or how the election system works, get out there and vote on Nov. 8. to make sure you send an elector that represents your candidate to the Electoral College.