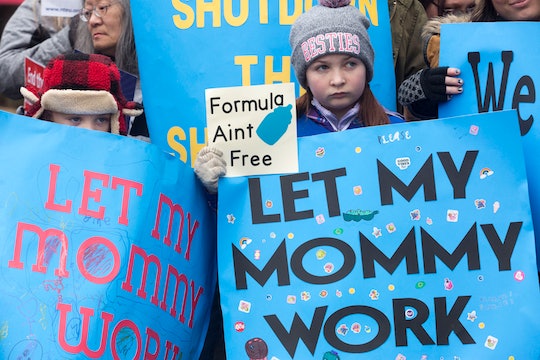 Now The Government Shutdown Is Affecting Your Kid's School Lunches

We are now in the midst of the longest partial government shutdown in America's history. By now, everyone has seen the coverage on television and in social media surrounding federal workers who are furloughed or forced to work without pay. That is just the tip of the iceberg. We are entering a crisis of funding that has far-reaching implications for everyone, and perhaps most especially, for the smallest of us all. Up until the last few days, there haven't been many in media asking how the government shutdown will affect schools and children, ostensibly because no one thought this shutdown would continue long enough for it to become the massive problem we're now facing. But it's time to address it.

Many schools will continue to run normally because the funding for this year was already distributed to public schools, according to the National Center for Learning Disabilities (NCLD), and that includes Title I funding for low-income schools. But programs like Head Start, the federally-funded preschool program, run out of funding on Feb. 1 according to their funding schedule, and are likely going to start closing centers if the shutdown continues.

Schools are also faced with the hard realities of this shutdown lasting long after everyone thought it would end. This means that schools might begin rationing their already limited budgets in anticipation of a long shutdown and possible loss of funding.

School districts like the Vance County School district in North Carolina are already preparing. Their officials announced on Facebook late Tuesday that school lunches “have been revised to a minimum level to conserve food and funding,” reported the Charlotte Observer. The first foods to go are fresh fruits, water, juice, and treats. In economically depressed areas, Title I schools provide nutritious meals to students each day, and according to Kaiser Permanente, students often receive more than half of their daily calories at school. To pare down these lunches to bare bones, and processed foods can have a hugely detrimental impact on student performance, noted Campbellsville University.

And school lunches aren't the only programs that will be affected negatively. According to the NCLD, schools on indigenous lands have already been affected because they exist on what is considered federally operated land, and operate with different laws than schools outside of reservations.

Education Week reported that one of the biggest issues is going to be that new crops of children in non-Title I schools now requesting free or reduced lunches, and that money will have to come from somewhere else in the school's already tight budget. Trips will get cut, plays won't be performed, all because the schools can't meet the funding gap.

Something else to consider when questioning how the shutdown affects schools is something very basic — how and when requests and aid are processed. The NCLD commented on their blog that basic services that require agents to liaise between state and federal governments will happen far more slowly given that many of the workers who would handle these types of issues have been furloughed as non-essential government employees. So even if there was money there to have distributed, it's even more difficult to receive or have approved.

Perhaps the issue that feels most insidious, most egregious, is that in just a matter of weeks the Supplemental Nutrition Assistance Program (SNAP) better known as "Food Stamps" and the Women's, Infants, and Children's (WIC) programs will lose funding and children will be attending school hungry, or their parents won't be able to afford rent, their medicines, or other simple daily necessities, reported CBS.

If the shutdown continues, there will be a cascade of problems that will inevitably play themselves out in the classrooms of our children. The problems at home quickly become the problems of the school, and disruption causes distraction, throwing off the equilibrium of society. It's no good for anyone, but especially not for our children, their teachers, and others we trust with the future of America.