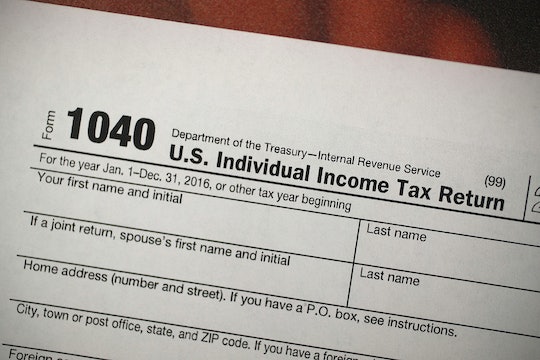 Here's How The Ongoing Government Shutdown Could Affect Tax Refunds

This country is now in the fifth week of the longest government shutdown in American history. It's also knee-deep in tax season, causing many to wonder what will happen to their tax refunds, unsure when, if ever, they will be processed. Tax return money is something many Americans rely on, and now the whole system seems unstable. It's important to know how the government shutdown affects tax returns, and how to plan for any eventuality.

More Like This
Tax Day Is Almost Here: Everything You Need To Know About The New Child Tax Credit
It's Not As Scary As You Think, Just Make Your Will Already
Vaccine Shedding Is Not A Thing, Experts Say
Can Ovulation Make You Anxious? Experts Explain

Different experts are of different minds on this subject. USA Today reported that it's likely that most returns will be processed on time as they always are beginning Jan. 28. This is because most of the work is done digitally, and only those who file paper returns or who do not choose to have their refund deposited directly — or those that require review — will be held up for any length of time. However, not all outlets are painting such a cheery picture. Tax and finance experts at Forbes are a bit more dubious of the government's ability to process returns due in part to the fact that the IRS will not be able to hire the masses of temporary workers that they usually do. That means that all of the day-to-day tax operations will be vastly slowed during the shutdown, which they predicted could have dire consequences.

This is all likely to be exacerbated by the fact that today more than 14,000 IRS employees did not show up for work, according to The Washington Post. Workers at the IRS aren't being paid, and the costs of going to work are outweighing the risks of staying home. The article reported that those who stayed home included tax processors and those who work in the call centers.

Meanwhile, the president and congress are still getting paid, and we still have to pay our taxes before the April 15 deadline, even if we are uncertain when they will be processed or when they will be returned. Everything in the governmental processes is up in the air right now, from SNAP benefits to tax returns to National Parks and their services, noted Vox.

To add insult to injury, federal workers who aren't getting paid are still required to file their taxes and pay anything that they owe, noted Fortune. Commerce Secretary Wilbur Ross apparently believes that silly things like bills and groceries will be paid by the money fairy that lives in the big wallet in the trees, but we all know that's not how it works. This year's taxes will likely hurt more than at any other time. Especially if you live in an area where your tax burden has gone up thanks to the tax bill passed in 2017.

The New York Times reported that Russell T. Vought, acting director of the White House Office of Management and Budget, told reporters that “tax refunds will go out.” Not when they would go out, if they would be timely, or if they would be subject to the rigorous screening that they normally are thanks to the shutdown — just an assurance that they will go out. I am not putting a lot of faith in that statement personally. And it's important to note that when the Times reached out to the IRS, no one responded. Romper has also reached out to the IRS for comment, and has not yet been contacted.

The reporters at USA Today stressed that you're more likely to see a timely return if you e-file and use direct deposit. That way, from start-to-finish, everything that needs to be done for you will be done by computers. Make sure all of your details are correct so that it won't be flagged for review.

The bottom line is that this tax season is set to be a hot mess, and that many of us might not see our refunds for quite some time. Prepare accordingly.