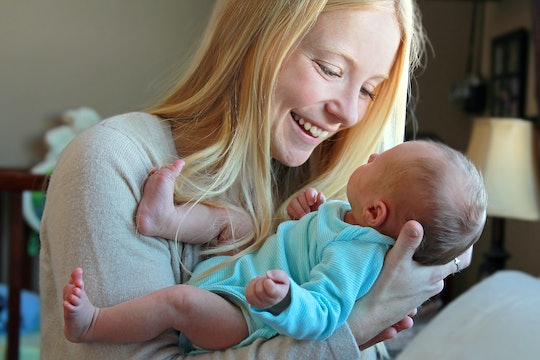 Lunar New Year is a celebration unlike any other across the world. It's one of only a handful of recognized holidays in China, and all the stops are pulled out. In the Chinese tradition, it ushers in a new animal in the zodiac calendar, so this year, it's the Year of the Earth Dog. Considered a loyal and friendly sign, it's an auspicious time if you follow the astrology. But How does the Lunar New Year affect your baby? The celebration lasts 14 days, so it's a pretty big window for little ones to feel the shift.

The Chinese zodiac is similar to Vedic and Kabbalistic astrology in that certain days are deemed either auspicious, inauspicious, or neutral for specific activities such as getting married, giving birth, or even digging a well. Lunar New Year in 2018 begins on Feb. 16 and ends on March 2. During this two week period, those born under other signs are affected by the year of the dog in much the same way that Taurus is affected during the time of Aquarius. Therefore, how Lunar New Year affects your baby is incumbent upon what sign they were born to.

I spoke with Chinese astrologer and Feng Shui instructor Siu Lin Fan, of Manhattan, New York and she says that it's really a numbers game.

According to Siu, there are a few days during this Lunar New Year that look to be especially good for having a baby, if you're pregnant. She notes that having a baby born during the year of the dog is already a great thing. "They will take care of you when you're older, and they won't forget to call you or just text all the time." Siu says they're courageous and loyal and quietly fierce. "Dogs are the kids in the movies who are happy hanging out, but if someone messes with their friend, they punch the other guy in the nose and then go back to popping bubbles with their gum." However, babies and kids born under other signs tend to be calmed by the year of the dog. It's a rooting influence, according to Siu.

It's important to note that while astrology is important culturally, it's not universally believed across Asian cultures and the diaspora. Siu, a first-generation American, says that while her parents were less concerned over days their children were born, by the time she started having kids, she gave the dates more gravity. "I can see the way the pieces fit with the numbers — when a baby is born and where, and how that corresponds to these ancient charts. "

According to Siu, while the shift from the Rooster to the Dog will impact babies, specifically their personality, it has a bigger pull on the parenting.

Depending upon which sign you're born under, you might encounter different parenting issues along the way, beginning during the volatile transition period of the next two weeks. For instance, I was born in the year of the boar, so my need for positive change and results might be challenged when my child hits a plateau or has colic. It could interfere with my comfort even more than it would normally.

Siu is expecting her 14th grandchild at any moment and hopes that he or she is born on a good day, but also says that "any day a baby is born healthy is a good day. Babies are special and represent the continuation of a family and the spring of the future." However, her pregnant granddaughter is a dragon, and they are volatile. Having a baby in the year of the dog challenges her pace, and she might be frustrated during the period. Also, if your baby was born in the past year, he or she is a rooster, and therefore the slow pace of the year of the dog, and the long transition into it, might throw your baby for a loop with teething or walking, or any process that would elicit a more lackadaisical attitude from the earth dog of 2018.

Hopefully, we can all learn from the laid back year of the canine, and be a little more rooted, a little more loyal, and — fingers crossed — not have so much disruption in our lives.