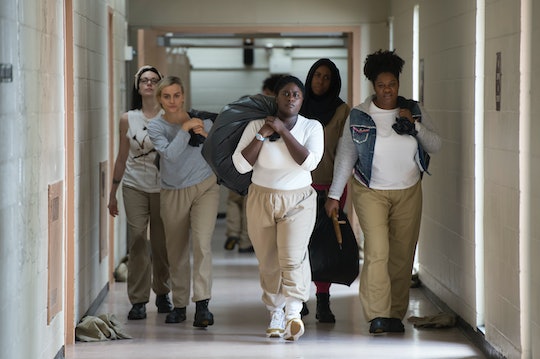 'Orange Is The New Black' Season 5 Ended On A Cliffhanger

Warning: spoilers from Season 5 ahead! Though Season 5 of Orange is the New Black only took place over a few days, enough happened in that time to leave Litchfield and its inmates forever changed. After months of tension and abuse had made the prison unbearable to live in during Season 4, the result was a riot: three days worth of fighting for something to change. But despite how much effort was being put into creating that change — especially by Taystee, who spearheaded negotiations — it all fell apart in the eleventh hour. But how did it all go so wrong? How did the riot end on Orange is the New Black?

Hours of negotiating back and forth led to Taystee getting almost everything she wanted for the prison (education, healthcare, hot Cheetos) except the thing she was most passionate about: justice for Poussey. Taystee was ready to gamble everything just to get C.O. Bayley put away for killing Poussey, so she decided that it would be all or nothing when it came to making a deal. She was able to take that risk because of the seven hostages being kept within the prison. But when Maria released the hostages in an attempt to strike her own deal for a reduced sentence, the inmates lost their leverage and any shot they had at getting their demands met. It was decided that enough was enough and the prison would be taken back by force.

The finale ended with officers streaming into the prison in full riot gear, throwing the women to the ground or pushing them up against the walls, tasering them and carrying them out of the prison to be counted. It was difficult to watch on top of everything else that had been done to these women before and after their arrival at the prison; it was one more harsh reminder that at the end of the day, they simply had no rights. Everything they had could be taken from them in a blink.

After being rounded up, the inmates were loaded onto separate buses headed for an unknown future — all except for a small group of women left behind in the prison, made up of Red, Piper, Alex, Nicky, Taystee, Cindy, Suzanne, Blanca, Gloria, and Freida. They waited for the officers to find them with no way of knowing what would happen to them after that. It was an ambiguous ending for the season that left everything in question.

In many ways the riot ended the way it began: with a chaotic burst of violence that altered life at Litchfield forever. But while it seemed like change could really happen during most of the season, the finale left little room for hope.

More Like This
When Does 'Yellowstone' Season 5 Come To Peacock? Not Soon Enough
Hey Fellas, 'Ted Lasso' Season 3 Is Coming Soon
Jinger Duggar Was Taught Motherhood Defined Her — & Then She Broke Free
10 Parenting Lessons We Learned From Red & Kitty In 'That '70s Show'
What Parents Are Talking About — Delivered Straight To Your Inbox